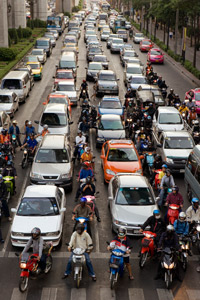 ­Single-car drivers commuting in fossil-fuel burning cars, smog­, pollution, crime -- what other ur­ban scourges can you think of? Half of the world's population currently live­s in urban areas; yet these urban areas make up only 2 percent of the world's land and spend three-quarters of the world's resources [source: MIT]. That's a lot of people in a very small space consuming a great deal.

Between now and the year 2050, urban growth will only continue to rise: 89 million homes and 190 billion square feet (about 17.5 billion square meters) of retail and other nonresidential space will be built in the United States alone [source: National Resources Defense Council]. And in conjunction with that density, pollution is soaring. London, for instance, released about 45 million tons (about 41 million metric tons) of carbon dioxide, a greenhouse gas, into the atmosphere last year [source: IEEE]. By greening cities and neighborhoods around the world, we have the opportunity to make a positive impac­t on global warming.

Here we'll look at five green cities of the future -- some that have broken ground for construction, some that are still the ambitious aspirations of city planners -- all competing to be the first carbon-neutral city in the world.