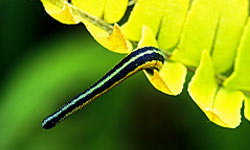 Parasites aren't all bad. In fact, some of them can actually be quite beneficial to humans and other living creatures. See more green science pictures.
David J. Slater/Getty Images

Parasites get a bad rap. By definition, parasites form a relationship that's characterized by exploitation and dependence. They take advantage of their often-unwitting hosts' hospitality, often leaving them sick and malnourished -- but usually not dead. Some of the creepiest examples of parasites turn their hosts into zombies, and like something out of a horror movie, they keep them alive while consuming them from the inside out.

Parasites aren't all bad, though. In fact, some of them can actually be quite beneficial to humans and other living creatures. Five thousand years ago, doctors in Egypt thought leeches could cure a wide range of ailments, from headaches to flatulence. That might sound crazy now, but we actually still employ leeches to help reattach severed fingers and to treat circulation disorders (and Demi Moore claims that leech therapy keeps her looking young) [source: Nature].

Since the days of ancient Egypt we've learned much more about parasites and the ways they interact with humans and other creatures. As much as we hate to admit it, parasites are just as important to the natural order of things as any other living creatures, and some scientists have posited that removing parasites from modern life can have serious consequences on human health. Humans have long been interested in turning the tables on parasites and getting them to help heal us, and as we get to better understand parasites we are able to use them in farming and other applications.

In this article, we'll take a look at some of the different ways parasites can be beneficial to humans, animals and even plants. And we'll also explore a couple of examples of symbiosis -- when the two species form a mutually beneficial relationship.