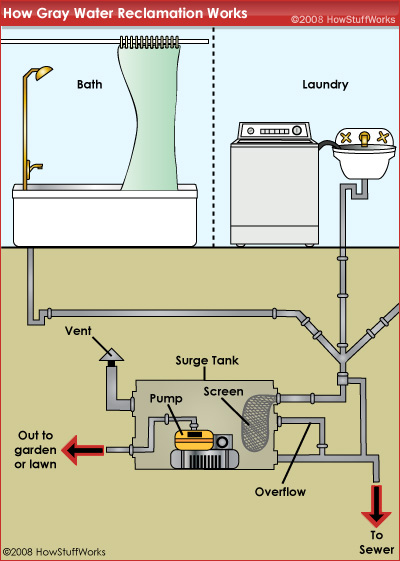 While the particulars of a gray water diversion or filtration system can vary greatly, several basic steps are commonly used.

A hand-activated valve serves as an important first step in many systems, especially the more basic diversion systems. This valve allows a person to decide when water from a bathroom sink, tub or washing machine will be diverted to the garden and when it will go into the sewage system or septic tank. This level of regulation comes in handy to avoid overwatering during times of heavy rain or sending harmful chemicals or diaper water out to the garden.

After gray water is diverted down a system of pipes, its first stop on its trip to the garden is a basic filter -- generally a mesh screen -- to eliminate larger particles, before entry into a surge tank. The surge tank is used to help regulate flow by temporarily storing large amounts of gray water. This helps ensure a bathtub's worth of drainage doesn't all rush into the garden at once, while also preventing it from backing up into the home.

Gray water can go two places from a working surge tank: out to the garden or down through a set of sewer drains. The bottom drain and the overflow drain (see above) work just like their counterparts in a bathroom sink, where the central drain provides constant drainage at the bottom while the higher, overflow drain keeps the water from rising above an undesired level.

The drains on a surge tank are always open because it is not a storage tank. To keep it from becoming black water, any excess water left at the bottom has to be allowed to drain off into the sewage system. The remainder of the gray water, at this point, flows or is pumped out to the garden or into a filtration system.

Filtration systems vary greatly in scope and price. The more advanced systems actually allow for treated gray water to be re-routed back into the home for use in toilets, laundry machines and even cooling systems. Some also eliminate the need for a surge tank. Simpler filtration systems are only aimed at further eliminating undesired chemicals and greases before water reaches the plants. Many of these simply involve letting gray water drain through boxes of layered sand, dirt or charcoal.

But how do you deliver gray water to an underground root system? To accomplish this, two methods of subsurface irrigation are used frequently:

But no matter what the scope or cost, the most important parts of any gray water reclamation system are the people and the plants sharing the water. There is no universal standard when it comes to reusing waste water, so much of it comes down to personal needs and commitment levels. On top of that, the technology, methods and laws governing gray water reclamation are constantly changing.