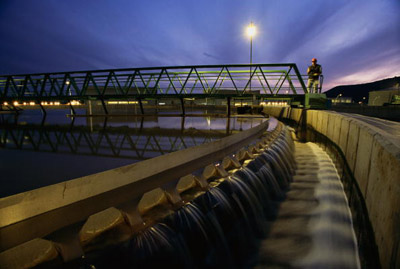 Would widespread gray water reclamation help or hinder sewage treatment plants such as this one in Santiago, Chili? Some say that without gray water to move waste along, sewage might not make it all the way to the treatment facility.
Photo by Peter Essick/Aurora/Getty Images

Until recently, many cities had no legal distinction between gray and black water, rendering most domestic reclamation efforts technically illegal. But due to increased concerns over droughts and water shortages, some residents and local leaders are pushing for updated laws to allow the regulated use of gray water reclamation.

And where there's demand, industry can't be far behind. Companies are now offering gray water systems, pre-construction consultation and custom installation, in addition to working on new technologies.

Still, a gray water reclamation system that is legal in one city may be deemed a health hazard in another. Some regions still classify gray water as sewage, while others provide residents with basic health and safety guides for reusing gray water.

Across the globe, the scope of gray water reclamation varies greatly. Australia and New Zealand have been ahead of the game for years, providing the local regulations, guidance and education needed for residents to make the most of their waste water. Mexico has begun using treated gray water for irrigation. However, in some less-developed nations, things are less encouraging. While gray water reclamation may not be prohibited by law in poorer nations, often there are far worse substances than soap suds draining into the soil. Ironically, the strict laws gray water advocates are fighting to overcome in developed nations were originally instituted to protect the environment and public health.

While some people are concerned over the potential health hazards involved with gray water reclamation, its effects on our sewage systems concerns others. As most sewer systems were designed before gray water reclamation was an option, a lot of that wasted water is used to carry waste to sewage treatment facilities. If less water is available for treatment, less clean water will then be pumped back out into the water supply [source: Colorado State University Extension].

There's a fragile balance between wasting less fresh water and reusing more gray water, and making sure water and sewage systems can keep pace with the changing ways residents approach water use. Most experts agree that it won't be home systems which have this kind of impact, but large-scale efforts by cities and major corporations.

But on the home front, gray water reclamation is a very user-specific practice. What works for a family of three might not fit well with the needs of a multi-family apartment dwelling. The details of a gray water reclamation system vary significantly, depending on geographic location, size of household, intended reuse and the level of commitment users will devote to making the most out of his or her waste water and protecting the environment.