Browse the article How does a forest fire benefit living things? 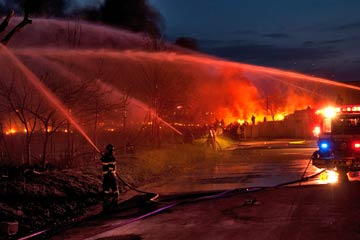 Firefighters battle a brush fire in the Meadowlands near Metlife Stadium, N.J. We know all about the evils of forest fires but what are some of the benefits? See lightning pictures.
Michael Bocchieri/Getty Images

Car fueled, cruise control set and audiobook in play, I drive a winding course through Kansas' Flint Hills. These rolling grasslands, which comprise most of the remaining tall grass prairie in the world, stretch to the skyline. Herds of cattle and a few deer dot the hillsides, their forms standing out against the waist-high grass. I imagine what it must have been like to travel by covered wagon across the undulating terrain as I watch a thunderstorm roll in. It seems like just the right daydream as clouds gather on the horizon.

As my route cuts the distance between car and clouds, the acrid smell of smoke infiltrates the interior. Ahead, I can see an orange line jumping through the grass. I begin to understand: This isn't a storm at all, but smoke from a fire.

On the Kansas prairie, controlled burns are not that unusual. It's a man-made attempt to mirror a natural burning cycle that kills invasive weeds and helps eradicate plant diseases. Out of the 47 million acres (19 million hectares) of farmland in production, an estimated 5 million acres (2 million hectares) are set ablaze each year [sources: Kansas Dept. of Health and Environment, KDHE].

Still, this amount of scorched farmland is not equal to the nation's forest fires. Started by humans or weather, whipped by wind and fueled by dry brush, an average of 100,000 forest fires consume on average 5.8 million acres (2.3 million hectares) in the U.S. each year. These fires destroy everything that cannot escape their path: animals, vegetation -- and increasingly -- property and people.

Of the 750 million acres (300 million hectares) of forest in North America, 57 percent is privately owned and becoming increasingly developed for residential use. This means forest fires are likely to harm people and buildings, along with trees and vegetation [source: Society of American Foresters].

Most would agree that forest fires are bad. But experts are also realizing there are benefits as well. In fact, fires (started by lightning) are a natural part of the circle of forest life. Today, the idea is not to prevent forest fires altogether, but to use them, via controlled burns, to our -- and the ecosystem's -- collective advantage.

A Campaign for and Against Forest Fires 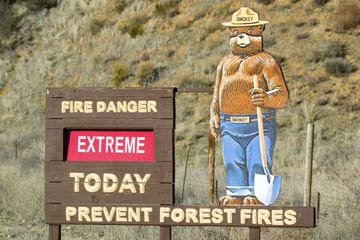 The campaign against forest fires has a lengthy history in the U.S., one that gained an emotional foothold in 1944 when the U.S. Forest Service introduced a fire-injured bear named Smokey. His message, "Only you can prevent forest fires," is important, considering that four out of five wildfires are started through the carelessness of campers or passersby [source: National Geographic].

By 2001, however, another strategy began to accompany this message of prevention. The Forest Service created a National Fire Plan to address the tinderbox conditions caused by decades of fire suppression, drought and scores of residential developments neighboring forests [source: U.S. Forest Service]. It is a multipronged approach that includes fighting fires by land and air, as well as controlled burns. These deliberately set and controlled fires are designed to take place under specific conditions and confine the flames to a predetermined area.

In general, the boundaries of a controlled burn include natural fireguards, such as streams, or man-made fireguards, such as tilled soil or gravel roadways. Before a burn takes place, weather must be taken into account. Too windy, and sparks will spread to unintended areas; too wet, and fuel will not burn. Most controlled burns take place when the wind is 5 miles to 15 miles per hour (8 to 24 kilometers per hour) and coming from a consistent direction. In addition to notifying neighbors and local enforcement agencies of the burn (in many cases, a permit is required), a local fire department should be on the scene in case the fire burns out of control.

Controlled burns begin by lighting a backfire using a flammable liquid, such as gasoline, along the downwind perimeter of the prescribed area. The fire will then burn slowly, usually with low flames, because it is moving against the wind. Additional flank fires may be lit along boundaries parallel to the wind. Finally, a fire is set along the boundary opposite the downwind perimeter. The fires burn toward each other, consuming all the fuel in their path and dying out upon meeting [source: Porter].

The idea behind controlled burns is to reduce the fuel that could feed a forest fire, should one start under uncontrolled circumstances. This dangerous scenario has become all too common in the American West, where heat and drought have turned entire sections of forest into kindling, ready to be sparked by lightning or lit cigarettes, and fanned by strong winds [source: Krock].

Yet, even these catastrophic events benefit living things, too.

After the Forest Fire: Benefits to Plants

Despite the damage that can occur to property and people, good things can come out of forest fires, too.

Forest fires are a natural and necessary part of the ecosystem. Even healthy forests contain dead trees and decaying plant matter; when a fire turns them to ashes, nutrients return to the soil instead of remaining captive in old vegetation.

And, when fire rages through dry underbrush, it clears thick growth so sunlight can reach the forest floor and encourage the growth of native species. Fire frees these plants from the competition delivered by invasive weeds and eliminates diseases or droves of insects that may have been causing damage to old growth. Wildflowers begin to bloom abundantly.

Most young, healthy trees are resilient enough to survive a forest fire and will soon have a growth spurt, thanks to flames that thin light-banning canopies above [source: National Geographic]. And scientists report young-growth forests recovering from fire are home to more diverse species, in both plants and animals [source: Krock]. This is because the remnants of burned trees offer attractive habitats to birds and small mammals, and nutrients from burned vegetation continue to leach into the soil to fuel the birth of new plants [source: Pacific Biodiversity Institute].

At Tall Timbers Research Station in Tallahassee, Fla., an experiment that lasted nearly 40 decades provided telling results. The 23-acre (9.3-hectare) swath of land was not allowed to burn during that time. Plant diversity fell by 90 percent and one species of bird, red-cockaded woodpeckers, disappeared entirely [source: Eilperin]. In order to thrive, this ecosystem, like many others, needed fire.

Controlled forest fires can be financially beneficial, too. Prescribed burns are less expensive than mechanical thinning -- the logging of small-diameter trees to reduce tree density and underbrush -- which costs around $28 an acre [source: Eilperin].

Millions of dollars are spent fighting forest fires, but this is actually only a fraction of the true financial damage. When property damage, loss of business revenue and other factors are taken into account, the financial toll rises exponentially. After the Old, Grand Prix and Padua wildfires blazed in Southern California in 2003, the 125,000-acre (50,585-hectare) fire cost an estimated $1.2 billion. However, only 5 percent of that figure was actually spent on fighting the flames [source: Western Forestry Leadership Coalition].

After the Forest Fire: Benefits to Animals 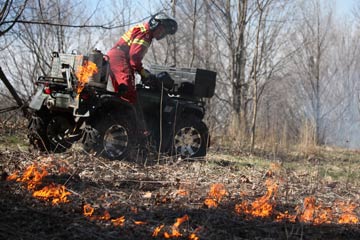 As part of a controlled burn, a worker ignites grasslands using a mixture of diesel and gasoline along specific areas, to protect and sustain rare black oaks. The oak seeds are so hard that fire helps them germinate and establish new growth.
Chris So/Toronto Star via Getty Images

Although some animals become injured or die from forest fires, most survive. The majority of animals can smell a fire, even when it's quite small, from miles away. Some animals, such as deer and bear, will flee the area while others, such as insects and small mammals, will burrow into the ground until the flames pass [sources: James, National Park Service].

And even though some animals may be displaced during a forest fire, the scorched earth will eventually provide an ideal new home for others -- one that is full of thicker vegetation fed by nutrient-rich soil.

That's because forest fires can create an all-you-can-eat buffet. More than 40 different kinds of insects, for example, will eat their way through fire-ravaged territory as they burrow into the wood that remains [source: Family on Bikes].

There's even a species of beetles that waits for forest fires, using heat sensors to come in from miles away to eat injured trees. These fattened insects then become food themselves as birds hunt for a feast all their own. The shrubs and grasses fertilized by fire-created nutrients will grow lushly; soon, deer and other grazing wildlife (even mice) will make a meal of them. Then, predators -- coyotes, mountain lions, bobcats, wolves and bears -- will get their fill of prey, too.

Years later, when the forest's growth has created a dark and damp interior framed by a leafy overhead canopy, the forest's remaining residents will move back in. Deep forest plants like mosses, lichens and animals like pine martens, spotted owls, and woodland caribou will once again call it home [sources: James].

Author's Note: How does a forest fire benefit living things?

Without fire, early humans would have been chilly vegetarians (it would have been difficult to subsist on dinosaur carpaccio during the long, cold winters, after all). Although we've come to rely on fire for survival and comfort, fire also can sweep through heavily wooded areas and threaten lives or livelihood. Still, there are benefits. These fires eat their way through underbrush and never reach the tops of the tallest trees. After the fire dies out, it leaves the forest clear of underbrush that chokes out new growth, making it ready for a new generation of native plants.