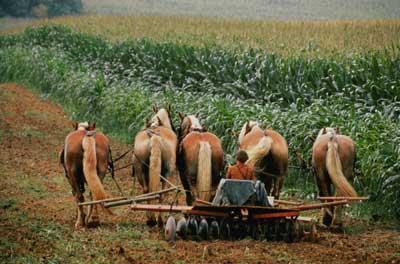 The Amish were green long before it was cool.
Bruce Hands/ Getty images

Residents of the three sustainable communities we just discussed deliberately placed sustainability at the top of their agenda. But communities spring up for lots of reasons not related to the environment, and sometimes the Earth benefits.

Before "green" was the new buzzword and sustainability was cool, Old Order Amish communities were quietly co-existing with the planet since the early 18th century. While members of this religious group didn't consciously develop their way of life to help the environment, their simple farm-based living doesn't hurt it.

The Amish use horses to power their farm equipment and to get around. Their homes have no electricity; instead, they use lanterns for light. In stark contrast to the rampant consumerism visible in many countries, the Amish do not own things they don't need. They wear simple clothes, and their houses are sparsely furnished. Amish communities didn't have to "return to the earth" to achieve their brand of sustainability. They were there all along.

They may look goofy, but people in eco-friendly cohousing developments are practicing sustainability by sharing meals and common resources.
Cheryl Maeder/Getty Images­­

Cohousing developments offer another example of a living arrangement that unwittingly practices sustainability. These developments typically are designed to encourage and strengthen social relationships, rather than to tread lightly on the environment, but, as it turns out, the two often go hand in hand. Although residents in a cohousing development enjoy the privacy of their own homes, like the citizens of Earthsong mentioned earlier, they share a common building and other resources.

Sharing major appliances like washing machines, power tools and heavy exercise equipment forces you to interact with your neighbors while reducing resource use. In addition, it allows individual houses to be smaller, which, along with the clustered arrangement of homes, preserves land. People who own cars (some people share cars) park them on the sides of the neighborhood to create a pedestrian friendly environment safe for children. Several times a week, residents may also eat a shared meal in the common building to strengthen ties. Cooking for many on one stove is much more energy efficient than cooking for 20 on separate stoves.

For more information on sustainable communities and tips on living a "greener" lifestyle, you can investigate the links on the following page.