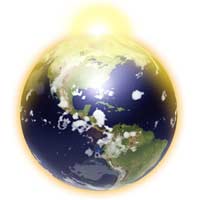 Global warming was once an uncommon term used by a few scientists who were growing concerned over the effects of decades of pollution on long-term weather patterns. Today, the idea of global warming is well known, if not well understood. It is not unusual to hear someone complaining about a hot day or a freak storm and remark, "It's global warming."

Well, is it? In this article, we'll learn what global warming is, what causes it, what its current effects are and what the future effects could be. Although there has been a scientific consensus on global warming, some aren't sure it's something we need to worry about. We'll examine some proposed changes in the United States' national policies related to curbing global warming and the criticisms and concerns surrounding them.

Global warming is a significant increase in the Earth's climatic temperature over a relatively short period of time as a result of the activities of humans.

To understand what this means, let's start by reviewing the difference between weather and climate.