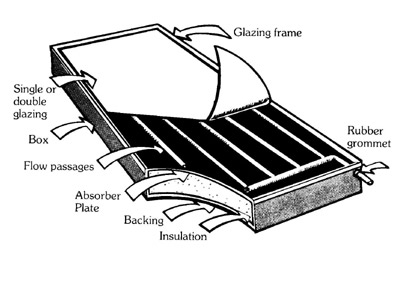 The core of a solar water heater is a solar collector and a storage tank. A solar collector is basically a glazed, insulated box with a dark-colored interior and, usually, a bunch of tubes or passageways for water flow. (Glazing is a coat of material, typically glass, that aids in heat retention.) The solar collector turns the sun's radiation into heat. A storage tank is exactly what it sounds like. It holds the water.

That's the basic setup, and some systems aren't much more complicated than that. The first distinction among solar water heaters is cut and dry: passive or active? An active heater uses electrical pumps and controls to move water around the system. A passive heater uses nothing but forces of nature. Passive is the simpler of the two.

There are two primary types of passive systems:

Active systems typically fall into one of three categories:

Whether the solar system is passive or active, it costs a lot more than you'd pay for a gas or electric model (more on price later). But some people are cutting back on the cost by making their own. As it turns out, the most basic type, the batch heater, is a relatively simple build-at-home project.