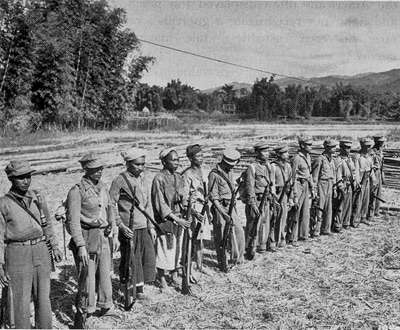 A squad of Burmese tribesmen assembled and trained to fight the occupying Japanese by an OSS detachment in World War II.
Photo courtesy U.S. Center of Military History

The beginnings of the Army Special Forces can be traced all the way back to a small contingent of Confederate Civil War soldiers led by Col. John Mosby. The soldiers staged raids in a manner that more resembles the modern Army Rangers. But it was a another military tactic -- winning the support of the local populations -- that has become a hallmark of the Green Berets.

The Special Forces were further defined by the Office of Special Services (OSS), the secretive agency that was created in World War II. During World War II, the OSS was charged with penetrating enemy lines held by the Axis armies. Once inside, the OSS officers helped train and support local resistance movements. In Burma, for example, three OSS officers organized a coalition of native tribesmen into an 11,000-strong guerrilla army -- soldiers who band together to engage in irregular warfare tactics -- that killed 10,000 occupying Japanese troops, but lost only 206 of its own fighters [source:SOC].

After World War II, the OSS was disbanded. But the need for the information and organization that the group provided continued. In 1952, three Army officers, led by Brigadier General Robert McClure, were granted permission to create a group of Army soldiers that could carry out sensitive missions on behalf of the United States government. A total of 2,300 openings were created to found the group, although it officially began with just 10 soldiers, including the leadership [source: SpecialOperations.com].

The official Special Forces' base of operations was established at Ft. Bragg, N.C., and soon the ranks grew. Eventually, detachments -- or units -- of as little as 12 men were formed, and bases of operations were set up in the United Sates and throughout the world. In 1953, the first deployment of Green Berets took place. Half of the force was sent to Bad Tolz, West Germany, which served as that group's base of operations.

Since that first deployment, the Green Berets have carried out thousands of missions, most in secrecy. Which means that the success of the Green Berets can hardly be measured; after all, how can you quantify something that doesn't happen, like a thwarted war?

So who are these highly specialized soldiers? In the next section, we'll learn about what makes a person a Green Beret.­

Kennedy and the Green Berets