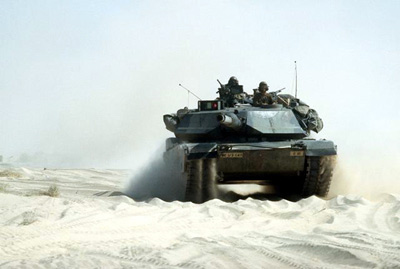 General Dynamics delivered the first M1 Abrams battle tanks to the U.S. Army in 1980, but it wasn't until 1991's Operation Desert Storm that the world fully appreciated the weapon's capabilities. The U.S. Army and Marine Corps deployed nearly 2,000 M1s to the Persian Gulf, and all but 18 returned in working condition. The tanks sped over the rough desert terrain, through heavy smoke from oil fires, destroying almost all of the Iraqis' Soviet tank fleet. In the entire operation, the United States didn't lose a single M1 crew.

The M1 is the world's preeminent tank because it combines four crucial qualities:

In this article, we'll examine these major components to find out how the M1 completes its mission.

Tanks got their name from a diversionary tactic. The Allied forces built the first tanks in absolute secrecy because they wanted to catch the Germans off guard. In order to conceal their plan, they told the workers building the weapons that the machines would be used to transport water on the battlefield. They shipped the machines in crates marked "tank," and the name stuck.

The M1 Abrams is named after the late General Creighton W. Abrams, who served as Army Chief of Staff and commander of the 37th Armored Battalion. The M1 is informally known as "The Beast," "Dracula" and "Whispering Death," referring to its impressive firepower and quiet operation.