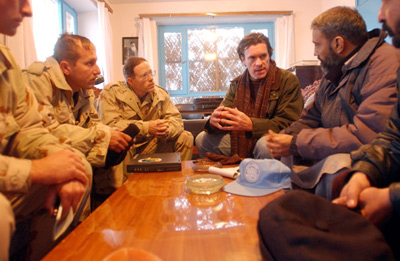 Green Berets take part in a meeting with local leaders as part of a Civil Affairs operation in Afghanistan.
Photo courtesy U.S. Army

The same training and cultural understanding that makes Green Berets valuable assets to the United States military also makes them valuable to people in need as well. Wartime humanitarian operations that aim to win the "hearts and minds" of local populations can translate well when peacetime crises arise.

In Rwanda in the 1990s, the Green Berets carried out operations to aide refugees caught in the crossfire of the civil war that was raging in the African nation. Green Berets helped thousands make it to refugee camps and helped support the operation of those camps as well.

During the Nicaraguan civil war in the 1980s, the Green Berets guarded the borders the Central American nation shared with Honduras and El Salvador. They were successful in keeping the violence from the war from crossing the border and sparking battles in the neighboring nations.

The Green Berets also serve as leaders of Civil Affairs (CA) operations, which are usually composed of local political groups and non-government organizations -- NGOs -- like the Red Cross. These CA operations may entail getting food relief to starving people in villages after a war or making sure that medical supplies make it to disputed areas.

In addition to disrupting regular supply lines, war can leave many marks on an area, like landmines and unexploded ordnance and forgotten booby traps. Following the Vietnam War, the fields and jungles of Cambodia were so fraught with unexploded mines that the country had the highest per-capita population of amputees, with one in every 236 Cambodians having lost at least one limb [source: Clear Path International]. Another humanitarian role Green Berets play is countermine operations, where detachments travel to foreign nations to remove and dispose of unexploded ordnance.

For a period in the 1970s, the effects of Green Beret humanitarian missions were felt in the United States as well. After the Vietnam War, the Green Berets began SPARTAN (Special Proficiency At Rugged Terrain And Nation-Building). Through this operation, Green Berets traveled to impoverished rural areas of Florida and North Carolina, where they helped locals with medical care and community-building projects that included schools and hospitals.

But what lies in store for the Green Berets? In the next section, we'll learn about the future of the Army Special Forces. ­­­

Controversy and the Green Berets

Despite their humanitarian work, the Green Berets don’t always act in the best interests of civilians. In August 2007, a British commander in Helmand province in Afghanistan requested that the United States military remove their Green Beret forces from the area. The Green Berets' air strikes resulted in a high level of civilian causalities and made it difficult for the British forces to win the “hearts and minds” of the local citizenry [source: The Scotsman].