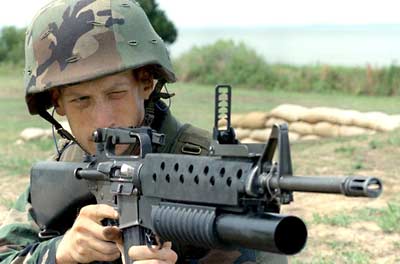 A soldier prepares to fire an M-203 grenade launcher mounted to an M-16 assault rifle. U.S. forces typically use rifle-attached grenade launchers like this one.
Photo courtesy U.S. Department of Defense

Impact grenades work like a bomb launched from an airplane -- they explode as soon as they hit their target. Typically, soldiers don't throw impact grenades as they would a time-delay grenade. Instead, they use a grenade launcher to hurl the grenade at high speed.

U.S. ground forces typically use grenade launchers that attach to assault rifles. In one conventional gun-mounted launcher design, grenades are propelled by the gas pressure generated by firing a blank cartridge. Some launcher grenades have their own built-in primer and propellant.

Afghan fighters and many other forces around the world use rocket-propelled grenade launchers, once mass produced by the Soviet Union. Like missiles, these grenades have a built-in rocket propulsion system.

Impact grenades must be unarmed until they are actually fired because any accidental contact might set them off. Since they are usually shot from a launcher, they must have an automatic arming system. In some designs, the arming system is triggered by the propellant explosion that drives the grenade out of the launcher. In other designs, the grenade's acceleration or rotation during its flight arms the detonator.

The diagram below shows the elements in a simple impact grenade with a rotation arming mechanism.

The grenade has an aerodynamic design, with a nose, a tail and two flight fins. The impact trigger, at the nose of the grenade, consists of a movable, spring-mounted panel with an attached firing pin facing inward. As in the time-delay grenade, the fuze mechanism has a percussion cap and a detonator explosive that ignites the main explosive. But it does not include a chemical delay element.

A Kurdish refugee with a Soviet RPG-7 grenade launcher, a common weapon in smaller armies and resistance forces
Photo courtesy Department of Defense

When the grenade is unarmed, the fuze mechanism is positioned toward the tail end, even though it has a spring pushing it toward the nose. It is held in this position by several spring-mounted, weighted pins. The firing pin is not long enough to reach the percussion cap when the fuze is in this position. If the trigger plate is pressed in accidentally, the pin will slide back and forth in the air, and nothing will happen.

When the grenade is fired it begins to spin (like a well-thrown football). This motion is caused by the shape and position of the fins, as well as spiraled grooves inside the barrel of the grenade launcher.

The spinning motion of the grenade generates a strong centrifugal force that pushes the weighted pins outward. When they move far enough out, the pins release the fuze mechanism, and it springs forward toward the nose of the grenade. When the grenade hits the ground, the nose plate pushes in, driving the firing pin against the percussion cap. The cap explodes, igniting the detonator explosive, which ignites the main explosive.

There are dozens of variations on this idea, some with much more elaborate arming and ignition systems. But the basic principle in most of these weapons is the same.

In the future, grenade mechanisms will continue to evolve. Already, some modern grenades use an electronic fuze system instead of a mechanical or chemical fuze. In time-delay electronic grenades, the fuze consists of a digital clock and an electrically operated firing pin. When the firing button or lever is activated, the electronic system starts a precise timer. At the end of the count, the fuze mechanism releases the firing pin. Since it uses an actual clock instead of a combination of chemicals, this timing system is much more accurate than conventional fuzes.

Some cutting-edge launcher-style grenades also have electronic fuzes and arming systems. The U.S. military is currently developing miniature grenades with electronic position sensors. With advanced grenade launchers, soldiers can program a grenade to explode after it has travelled a certain distance. In this way, a soldier can pinpoint particular targets, even ones behind barriers, with extremely high precision.

To learn more about grenades, including their role in military history, check out the links below.