Gyroscopes can be very perplexing objects because they move in peculiar ways and even seem to defy gravity. These special properties make ­gyroscopes extremely important in everything from your bicycle to the advanced navigation system on the space shuttle. A typical airplane uses about a dozen gyroscopes in everything from its compass to its autopilot. The Russian Mir space station used 11 gyroscopes to keep its orientation to the sun, and the Hubble Space Telescope has a batch of navigational gyros as well. Gyroscopic effects are also central to things like yo-yos and Frisbees!

In this edition of HowStuffWorks, we will look at gyroscopes to understand why they are so useful in so many different places. You will also come to see the reason behind their very odd behavior! 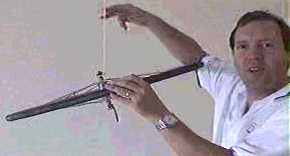 The Cause of Precession

As forces are applied to the axle, the two points identified will attempt to move in the indicated directions.

Why should a gyroscope display this behavior? It seems totally nonsensical that the bicycle wheel's axle can hang in the air like that. If you think about what is actually happening to the different sections of the gyroscope as it rotates, however, you can see that this behavior is completely normal!

Let's look at two small sections of the gyroscope as it is rotating -- the top and the bottom, like this:

As the two points rotate, they continue their motion.

This effect is the cause of precession. The different sections of the gyroscope receive forces at one point but then rotate to new positions! When the section at the top of the gyro rotates 90 degrees to the side, it continues in its desire to move to the left. The same holds true for the section at the bottom -- it rotates 90 degrees to the side and it continues in its desire to move to the right. These forces rotate the wheel in the precession direction. As the identified points continue to rotate 90 more degrees, their original motions are cancelled. So the gyroscope's axle hangs in the air and precesses. When you look at it this way you can see that precession isn't mysterious at all -- it is totally in keeping with the laws of physics!

If you mount two gyroscopes with their axles at right angles to one another on a platform, and place the platform inside a set of gimbals, the platform will remain completely rigid as the gimbals rotate in any way they please. This is this basis of inertial navigation systems (INS).

In an INS, sensors on the gimbals' axles detect when the platform rotates. The INS uses those signals to understand the vehicle's rotations relative to the platform. If you add to the platform a set of three sensitive accelerometers, you can tell exactly where the vehicle is heading and how its motion is changing in all three directions. With this information, an airplane's autopilot can keep the plane on course, and a rocket's guidance system can insert the rocket into a desired orbit!

For more information on gyroscopes and their applications, check out the links on the next page!