Browse the article Algae: Pond Scum or Food of the Future? 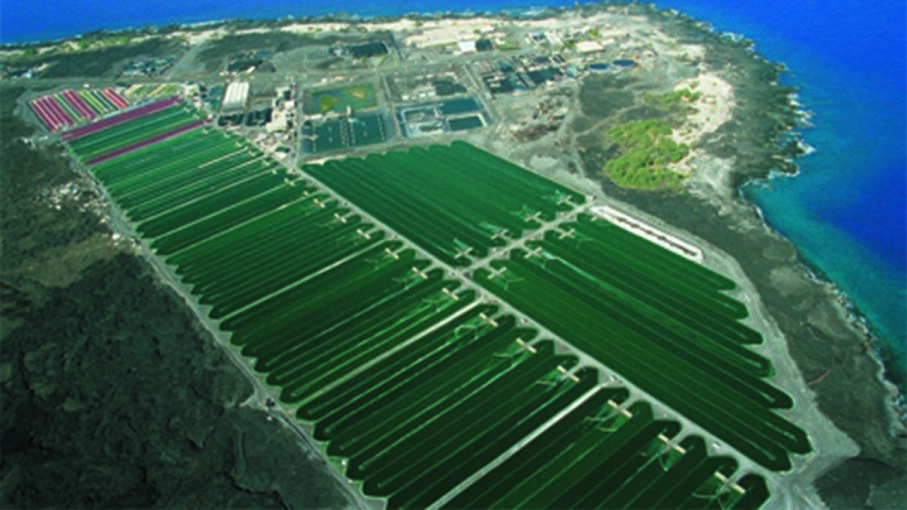 Aerial view of the algae ponds at Cyanotech, a Hawaii-based company that produces microalgae health and nutrition products. Wikimedia/CC0 1.0 Universal

Could algae be a solution to projected food shortages in the future? Some growers are hoping so.

Despite its reputation as pond scum, algae nevertheless represents big money to some investors and a possible solution to the world hunger problem. In fact, you may already be ingesting the little green plant. Algae is found in "green smoothies," specialty chips, protein bars, protein powders and supplements including Omega-3 capsules. One type of algae, spirulina, has long been on the market as a nutrition-packed health food. Algae is also an ingredient in animal feed.

But it could become a much more important food source, say people like Miguel Calatayud. He runs a farm in Columbus, New Mexico, where salt-water ponds stretch out across under a desert sky. Algae "is the foundation of the next generation of farming and food," he told CNN recently. It can provide lots of protein while using relatively little in the way of scarce resources. Calatayud, CEO of Qualitas Health, which owns Green Stream Farms, grows an algae strain called nannochloropsis in the salt water. The algae grows very fast using sun, air and water — and most of the water is recycled. It can be harvested year round. The algae is 40 percent protein, and it isn't slimy and smelly, according to the company.

But what would it taste like? "You're not going to be eating an algae sandwich soon," says Barry Cohen, executive director of the National Algae Association. Algae will most likely be used as a new protein ingredient in food products. "A lot of companies are testing it," he says.

It's seen as filling the role that soybeans have filled. Soy is often added to meat products, cereals and bread and used in vegetarian products as a meat substitute.

"This industry is growing," Cohen says. "It's small — maybe 10 to 15 companies around the world."

Urban population growth around the world — particularly in Asia and North Africa — will put a strain on food resources, according to the United Nations, which expects an increase of 2.3 billion people by 2050. Nearly 70 percent of Earth's fresh water already goes to raising crops and livestock. And raising livestock as a protein source is an inefficient use of resources. "We can grow algae on water, recycling 75 to 80 percent of the water and do it in a much smaller footprint ... and you make a high-value product," Cohen says.

In addition to feeding a growing population, algae is seen as a way to address existing malnutrition. The Swiss Antenna Foundation cultivates spirulina in Tamil Nadu, India. The plant is given as a supplement to children to combat malnutrition and the foundation trains people in local production as a way to encourage local sustainability.

A Tamil Nadu company run by Aakas Sadasivam (India) and Mika Rautio, a Finnish partner, is also growing algae. The company, Prolgae Sprulina, produces sun-dried spirulina that is made into a crunchy snack called Spirulina Nibs and also sold as protein powder.

Long before the current efforts to sell algae as food, algae was considered a potential source of biofuel. $2.5 billion has been spent over 70 years to try to create biofuel from algae, Cohen says. "Algae secretes oil," Cohen says. When oil prices were high, oil companies began researching algae as a fuel alternative. Now that oil prices are low, companies may be looking for new uses for algae. "If [oil companies] could construct and deploy large biofuel farms, that could be one solution to the electric car since the infrastructure is already in place.” Algae biofuel is, of course, carbon neutral.

Algae also pulls in carbon dioxide and puts out quantities of oxygen. But in some respects, algae is a bad guy. Harmful algal blooms create toxins in seawater, killing fish and other marine life. But putting algae to work — and putting it on the table — could help it redeem itself.

Now That's Interesting:
Algae isn't the only unexpected "goodie" that could turn up on future menus. Some people who predict these things are expecting lab-cultured chicken, a new-old grain called kernza and, of course, cricket flour. Yum.