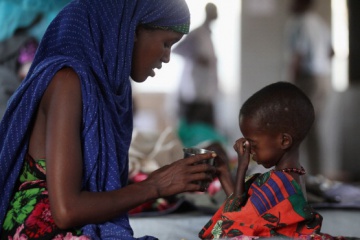 Educating women and ensuring the health of children are two top priorities in the effort to end world hunger.
Oli Scarff/Getty Images

During the summer of 2011, the Horn of Africa went hungry. Throughout Somalia, Kenya and Ethiopia, 10 million were starving, among them 2 million children. Some 500,000 of those children were so malnourished the situation was life-threatening [sources: Guardian, Guardian]. Rationed packets of peanut paste -- a high protein supplement known as Plumpy'Nut -- were all that stood between many of them and death.

So how come so many people perish for want of food, while in other parts of the world, fare is found in abundant supply? The 2011 food crisis stemmed from a number of factors. An ongoing armed conflict drove many people from their homelands and limited aid workers' access. A severe drought ruined two consecutive crops, killed livestock and drove already high food prices beyond what many families could afford. So although worldwide production currently outpaces global demand, not everyone has access to enough food [source: Hunger Notes].

The push to halt hunger happens on many fronts. For example, to find both short-term and long-term fixes in areas of famine, some organizations provide lactating women with supplementary aid while their children are nursing, while also offering classes teaching them proper nutrition, so they have a better understanding of how to keep their families fed and healthy in the long-run.

But so far, no one has come up with a massive game changer: Nearly a billion people routinely go undernourished in any given year. Several factors muddle famine mitigation efforts. Sometimes, those who need food support are located in remote or unreachable areas that are hard for overtaxed relief workers to reach -- as was the case in the 2011 Horn disaster. Lack of funds is another issue. Although areas ripe for famine are often identified well in advance, donors sometimes shuffle their feet until the situation is dire enough to draw major media attention.

A world free from hunger is one we've never known. On the next page, we'll take a look at a major consideration in the battle to feed the planet's billions, and the complications that ensue at a practical level.

The Story of Seeds

If we're going to talk about famine, though, first we need to talk about agriculture, and more specifically, seeds. Seeds have undergone a large -- and for the most part, largely unheralded -- transition over the past several centuries, perhaps no more so than as in the 20th century [source: Tomanio]. In the past century, high-yielding hybrid seeds took a tour de force across much of the world, out-competing native strains whose harvests weren't as robust. Hundreds of millions of people were more properly fed in the process, but with that came a price [source: Seabrook]. Loss of plant diversity plagues the mind of many an expert in agriculture, and the main concern is that by practicing monoculture, and relying on those few, high-yield varieties, we lose valuable long-evolved genetic biological defense mechanisms. If a major staple crop fails, many may starve.

Efforts to foster cooperation and exchange between nations where seed varieties originated, and nations where those seeds were subsequently enhanced artificially, have been ongoing for several decades. It's a delicate dance to foster international food security, and one that is still being tapped out on the dance floor. Some argue that hybridized and genetically modified seeds are the intellectual property of the developer; others believe that since the base products have been cultivated by those people for thousands of years, such a move is biopiracy. Then there are arguments over the finished products. The higher yields of modified crops are helpful for feeding growing population numbers in a warming world, but apart from concerns with monoculture practices, many question whether these products are safe alternatives to naturally evolved crops -- to the extent that some countries will not allow them to be sown within their borders. If we're all going to eat, issues like these must be resolved.

In the eyes of some, an important step in the fight to end famines is returning to a world where farming takes place on the local level and uses a diverse sampling of botanical varieties. In other words, a world free of famine would not be one that catered to global import/export systems and booming agribusiness industries, but rather one where a tradition of seed banking and local distribution systems ruled. One where a farmer grew 12 varieties of potatoes rather than one, in addition to a garden variety of other foodstuffs. Of course, following this school of thought to the letter seems likely to land us squarely back to where we were in the first place: When local crops fail, there's no convenient infrastructure, or store of tradable food, to import emergency stores.

Strictly small-scale operations can still potentially lead to limited outbreaks of famine if crops fail and outside surpluses can't be bought. And large-scale operations can also lead to hunger if monocultures are threatened or global distribution systems falter. So would a world without famine operate somewhere in between those extremes? It seems likely.

Other features of our famine-free world? Money would probably be more evenly distributed, so everyone could afford the food necessary to feed their families, and the economy would display more stability and equality as well. Educational efforts and worker productivity would be more effective, since hunger hampers mental acumen as much as physical abilities. Many wars and armed conflicts would likely be at an end, considering displaced refugees are susceptible to falling prey to famine. In fact, much governmental and industrial corruption of all sorts would reasonably be a thing of the past, too. We'd also probably have gotten climate change under control, because we apparently would no longer be worried about whether our crops could flourish in an increasingly warmer world.

Sounds like a pretty great place, huh? And the list could go on. Hopefully some day we can make it happen. More links to life's big questions on the next page.