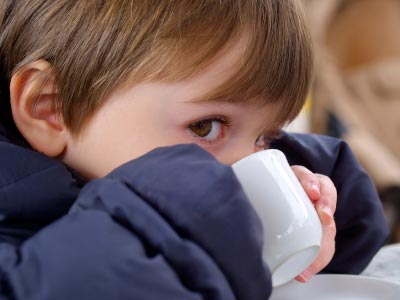 Can a little one enjoy a sip of a hot beverage on a cold day?
©iStockphoto.com/struki

Coffee: It's a beverage with lore and legend as rich as a double caramel latte.

An advertisement from the first coffeehouse in England promoted coffee as "good against sore eyes" and "excellent to prevent and cure the dropsy, gout, and scurvy." In the early 1700s, Germans believed the beverage made women sterile. An old wives' tale states that if bubbles appear in your java, you're due to come into money — not a bad thing considering the price of a cuppa these days.

In more recent times, another idea took hold of the public's imagination regarding coffee — that it had the power to stunt a child's growth. But just as a pot of coffee boiling over doesn't mean it's going to rain (again from those old wives), the assertion that the drink makes for a nation of hobbits has been proven false.

How coffee got associated with this myth is cloaked in the espresso-colored steam of history, but most experts agree that it has something to do with an early study linking caffeine to reduced bone mass and osteoporosis. Those studies, however, were conducted on elderly people whose diets were lacking in calcium, which could easily have explained the loss of bone mass.

Subsequent studies showed that women aged 65 to 77 who drank about 18 ounces of caffeine daily did have greater bone loss over a three-year period than those who didn't. But the effects occurred only in women with unusual variations in their vitamin D cell receptors — and were completely mitigated if the women ingested the recommended daily allowance of 1,200 mg of calcium a day [source: Collins].

Focusing exclusively on children, a more recent study tracked 81 teenagers for six years. The result? There was no difference in bone density between the biggest buzz catchers and those who drank the least amount of caffeine [source: O'Connor]. But just because a cup of joe doesn't keep little Joe pint-sized all his life doesn't mean there isn't cause to be concerned about children and coffee, as we'll see in the next section.

The Dark Side of Coffee

Coffee has come a long way from the time when Turks retreating from Austria left behind beans so bitter that the Viennese felt compelled to add copious amounts of milk and sugar — making what's regarded as the world's first cappuccino. (The drink is so named, it's believed, because a friar who helped rebuff the Turks belonged to the Capuchin order of monks.)

These days, coffee creations can seem more like dessert than a simple pick-me-up in a cup. The Starbucks menu includes such treats as a mint mocha chip frappuccino blended with chocolate whipped cream, while Dunkin Donuts offers up vanilla bean coolattas that list corn syrup not once but twice on their ingredients list — along with sugar and sweetened condensed skim milk.

So, although it's been proven that there are relatively minor health issues associated with caffeine — jitteriness, anxiety, heartburn, insomnia — it's actually the other ingredients added to coffee, especially sugar, that have nutritionists worried.

It's no secret that America has a burgeoning problem with childhood obesity and diabetes, and 860-calorie-packed drinks like the large coolatta aren't helping. This is particularly troubling when, according to the National Coffee Association, 18- to 24-year-olds represent the fastest growing segment of people who turn to coffee each year.

In addition to expanding young waistlines, coffee can cause the mouth to dry out, which contributes to tooth decay. The problem is compounded by the fact that the tannic acid in coffee can stain teeth enamel, giving some grins an unwanted café au lait tinge.

And coffee doesn't just affect the health of 20-somethings — pregnant women are also warned to consume no more than two cups a day. Researchers in England found that pregnant women who drank more than 200 mg of caffeine a day (the amount in two average-sized cups of coffee) were more likely to give birth to underweight babies [source: Elliott]. Lower birth weights can also lead to spontaneous miscarriages — another health concern with which caffeine has previously been associated.

But if you're not pregnant, drink enough water, get enough calcium and don't add shovelfuls of sugar to your java, the health benefits of coffee far outweigh its negatives, as we'll see next.

Who was Joe, Anyway?

Coffee has picked up a few nicknames throughout the years, but one of the most enduring has been "Cup of Joe." Why did we decide to give one of our favorite beverages a human name? The answer seems to lie with the secretary of the U.S. Navy, who in 1914 banned alcohol aboard all ships, causing the sailors to turn their next favorite drink — coffee. The secretary's name? Joe Daniels. 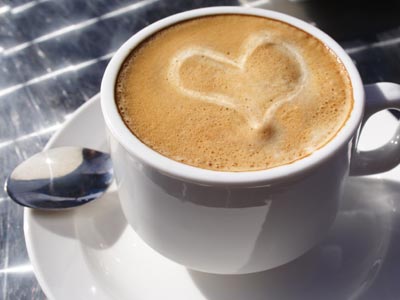