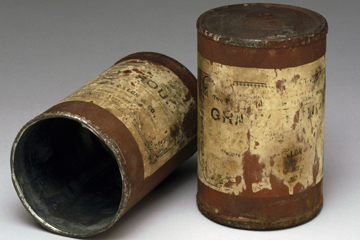 These two tin cans containing food date from the Boer War (1899-1902). Canned food was developed in the 1860s.
SSPL/Getty Images

In general, if you have purchased a perishable food item before its expiration date and promptly refrigerate it, it will keep for quite some time. Eggs, for example, can be used up to five weeks later. Fresh apples will keep a couple of months in the refrigerator. Just be sure to watch for warning signs like off-putting odors, colors or flavors, which can indicate spoiling [source: Eat By Date].

You also may consider using the freezer to extend your consumption range. Raw chicken breasts, for example, could be stored in your refrigerator for a couple of days, while a cut of beef could keep for up to five days. Transfer either of these — or other perishable items — to the freezer and it will be safe indefinitely. It may not taste great after existing in subzero temperatures for two years, but it will still be safe to eat. You can even freeze milk, although you should plan on using it for cooking rather than drinking because of the change in taste [sources: USDA, Dairy Council of California].

Canned goods and shelf-stable foods like boxed macaroni-and-cheese have greater latitude than their perishable cousins. Unopened, they can be eaten a year or two past their expiration dates, although there have been more extreme examples. In 1974, scientists at the National Food Processors Association in Washington, D.C., opened and studied a 40-year-old can of corn, along with 100-year-old canned oysters, tomatoes and red peppers. The food looked and smelled edible and even retained most of its nutrients, save lower levels of vitamin C. Although the scientists didn't stage any tastes, they believed the food would have been safe to eat. That's good news for all the preppers out there stockpiling canned goods in their bunkers [source: Charles].

I've been wrong all along. There has been a great debate about food in my home, particularly when it comes to expiration dates. I err on the side of caution, tossing yogurts, condiments, soups, leftovers — anything that goes a day past its prime. I blame my mother (in the most loving way). A child of the Great Depression, she is exceedingly frugal. She's been known to remove mold from cheese and serve the good parts with dinner. When she cracks an egg, she runs her finger around the inside of the shell to remove all the white. She adds water to soup and never makes a meal that can't be stretched to feed a crowd. She's actually a great cook, but her tendency to see expiration dates as a moving target influenced my food storage habits in adulthood. I've been faithfully obeying expiration dates for years. Now it looks like I may need to change my tune. Or what's on the menu, at the very least.