Is spinach really a good source of iron or not? 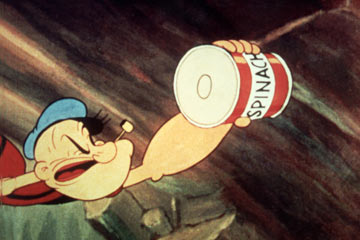 Popeye reaches for his trusty can of spinach. Is it really a good source of iron?
Paramount Pictures/Getty Images

Scooby has snacks. Garfield has lasagna. And Cartman has cheesy poofs. Yet none rival the relationship Popeye has with spinach. When Popeye eats spinach, his forearms triple, he gains supercharged strength and, perhaps most puzzling of all, he perpetuates one of pop culture's greatest myths.

Popeye first munched a mouthful of spinach in a July 3, 1932, cartoon strip. Although the sailor man wasn't known for speaking clearly, his actions sure did: Spinach is good, and good for you. Decades later, children are still hearing parents say, "Eat your spinach" -- for its iron content -- "so you can be big and strong like Popeye."

But that's not exactly how the real story went. Popeye actually quipped: "Spinach is full of vitamin 'A' an' tha's what makes hoomans strong an' helty" [source: Cronin]. Turns out, Popeye didn't eat spinach for iron, he gobbled it for vitamin A. (Specifically, he ingested beta-carotene, which his body transformed into vitamin A.)

Spinach, known as Spinacia oleracea, is an annual plant eaten for its elliptical leaves, which average 2 to 30 centimeters (.78 to 22 inches) in length. Although there's not a definitive answer on which of the two main types of spinach Popeye preferred, we're betting it was flat leaf spinach, a smooth-leaved variety that is usually canned or frozen [source: Leafy Greens Council]. Curly leaf spinach, sometimes known as savoy spinach, has wrinkly leaves and is often found in pre-washed packages at supermarkets or on salad bars. It has a slightly sweet taste and, when harvested early, is called baby spinach. There's also a hybrid of the curly and flat leaf varieties, known as semi-savoy [source: University of Georgia].

Popeye's motivation for snacking on spinach isn't the only myth surrounding this leafy green. Another is that spinach isn't really a good source of iron – people just thought so due to a math error. We'll take a look at the myths -- and facts -- all wrapped up in this veggie.

Spinach has been grown in Asia for so many centuries that its origins predate existing records. Even if scholars and spinach experts aren't able to pinpoint the exact birthplace of this vegetable, one thing is certain: If there were an award for lifetime achievement, spinach would definitely be in the running. By the 1400s, spinach had made its way throughout Asia where it became a mainstay of many European menus. Today, it's a multi-faceted green eaten worldwide in everything from casseroles and pastas to soups and salads [source: Colorado State University].

Currently, China produces about 85 percent of the world's supply of spinach, followed by the United States, which harvested 280,000 metric tons (618,000 pounds) of spinach in 2011 alone [source: Borris]. By far the largest U.S. spinach producer is California, trailed by Arizona, New Jersey and Texas [source: USDA].

The controversy surrounding the amount of iron in this leafy green centers on a report made in 1972 by a nutritionist. Professor Arnold Bender asserted that 19th century German researchers made an error when recording spinach's iron content by placing the decimal point in the wrong position, accidentally multiplying spinach's iron content by 10. The story, which contended spinach had no more iron than other common vegetables, was perpetuated as fact in medical journals, textbooks and popular culture for more than 30 years until it was proven incorrect in a meticulously researched article by criminologist Mike Sutton. Sutton concluded that these German researchers never existed [source: Kruszelnicki, Sutton].

So what's the truth about spinach's iron content? According to the USDA, there are:

One cup of cooked fresh spinach contains about one milligram more iron than you'll find in 3 ounces (85 grams) of beef liver, which has long been known for its iron content. And far more than you'd encounter in a head of lettuce. In fact, you'd need to eat the entire head of lettuce to gain just 2.02 milligrams of iron, a fraction of what you'll find in spinach [source: USDA].

However, spinach also contains oxalic acid which inhibits iron absorption. So it's good to eat it with foods that enhance iron absorption like meat, fish, poultry, citrus fruits or certain vegetables like broccoli, sweet peppers, tomatoes and potatoes [source: Tsang].

Few industries have shown appreciation to their fictional supporters like spinach growers. In the so-called "Spinach Capital of the World" Crystal City, Texas, a statue of Popeye silently greets visitors to city hall. And in Alma, Ark., which is situated in the middle of the state's spinach growing region, townspeople have erected a Popeye statue, too [source: Richter].

The Truth about Spinach

Spinach is a nutritional powerhouse. In addition to being high in iron, it contains high levels of vitamins B and C, as well as antioxidants like beta-carotene (which the body converts to vitamin A) and lutein. Spinach also is a good source of minerals, including magnesium and zinc [source: Seay].

If you're selecting canned or frozen spinach at the local supermarket, you don't need to employ a lot of strategy to find the right one. Simply check the expiration date, compare the price and make a decision. Fresh spinach, however, requires a bit more consideration. Fresh spinach should be consumed at the height of its color, so look for taut upright leaves with a deep, viridian hue -- the lush sort of green that brings to mind rainforests and leafy canopies. Then, turn a few of the leaves to make sure they are free of bruises, abrasions or yellowed areas.

Keep in mind that spinach is often grown in sandy soil, so unless you're purchasing the prewashed kind, you'll need to briefly soak the leaves in cold water, swish them around and then empty the bowl of debris. After a few rounds of this, you should have clean spinach at your fingertips [source: Beck]. Fresh spinach loses nutrients every day it is stored in the refrigerator so you may not want to buy more than you can consume quickly [source: Science Daily].

If you're using spinach as an ingredient when cooking, you'll need to pay attention to whether the recipe calls for fresh, canned or frozen. Fresh spinach is 92 percent water, which means you'll need a lot more of it to equal the same amount as a can of spinach [source: University of Kentucky]. This explains the differences in iron content in our list on the previous page. However you elect to ingest it there's a simple truth about spinach: It's good for you.

Author's Note: Is spinach really a good source of iron or not?

My first experience with spinach (that I remember, anyway) was in the cafeteria of my elementary school. All the foods we were served, from buttery rolls to mashed potatoes, were made in the school kitchen by a handful of fabulous cooks. It made such an impression that some of their now-adult students, including several of my classmates and myself, occasionally request a favorite school lunch recipe from the lunch ladies. I plan to surprise one of my older brothers with a batch of Whitewater Elementary School's frosted raisin bars the next time he's here for a visit, and there's one other dish I make quite often that's inspired by those early dining experiences. Cooked spinach. I know it's hard to imagine a bunch of elementary children tucking into a plate of cooked spinach, but I promise you it happened. Not only did these women put a lot of care into the food they whipped up for us, but they also encouraged us to sample a little of everything. Turns out they were right. Sometimes you just have to try it.