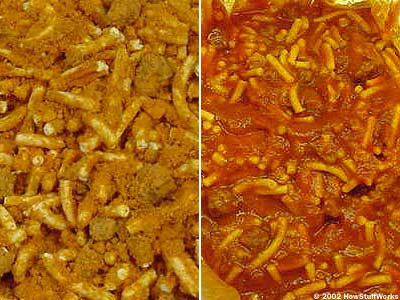 A freeze-dried meal of spaghetti and meatballs, designed for campers: On the left is the dried version; on the right is the rehydrated version.

The basic idea of freeze-drying is to completely remove water from some material, such as food, while leaving the basic structure and composition of the material intact. There are two reasons someone might want to do this with food:

People also use freeze-drying to preserve other sorts of material, such as pharmaceuticals. Many pharmaceuticals will degrade pretty quickly when exposed to water and air, for the same basic reason that food degrades. Chemists can greatly extend pharmaceutical shelf life by freeze-drying the material and storing it in a container free of oxygen and water. Similarly, research scientists may use freeze-drying to preserve biological samples for long periods of time. Freeze-dried biological samples are also big in the florist world, oddly enough. Freeze-dried roses are growing in popularity as wedding decorations. The freeze-drying process has also been used to restore water-damaged materials, such as rare and valuable manuscripts.

Photo courtesy NASA Freeze-dried foods have been a staple onboard many of NASA's space missions.

It's pretty simple to dry food, drugs and just about any other biological material. Set it out in a hot, arid area, and the liquid water inside will evaporate: The heat gives the water molecules enough energy to "break free" of the liquid and become gas particles. Then you seal it in a container, and it stays dry. This is how manufacturers make dehydrated meals like powdered soup and baking mixes.

There are two big problems with this approach. First, it's difficult to remove water completely using evaporation because most of the water isn't directly exposed to air. Generally, dehydrating food in this way only removes 90 to 95 percent of the water, which will certainly slow down bacteria and enzyme activity, but won't stop it completely.

Secondly, the heat involved in the evaporation process significantly changes the shape, texture and composition of the material, in the same way that heat in an oven changes food. Heat energy facilitates chemical reactions in the food that change its overall form, taste, smell or appearance. This is the fundamental purpose of cooking. These changes can be good, if they make the food taste better (or taste good in a different way), but if you're drying something so you can revitalize it later, the process compromises quality somewhat.

The basic idea of freeze-drying is to "lock in" the composition and structure of the material by drying it without applying the heat necessary for the evaporation process. Instead, the freeze-drying process converts solid water -- ice -- directly into water vapor, skipping the liquid phase entirely. In the next section, we'll find out how freeze-drying machines pull this off.