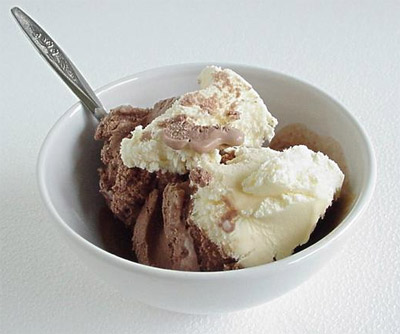 The U.S. ice cream industry sells more than a billion gallons of ice cream each year, dispensing cones, gallons, pints, sundaes and other desserts through grocery stores and ice cream shops. In fact, eight percent of all the milk produced in the United States ends up in a f­rozen dairy product [ref].

Although ice cream can be easy to make at home, it is actually a very complex substance. In this article, we'll learn how it's made, what goes into it and who invented it. We'll also learn how to quickly make ice cream in your kitchen.

Not just any frozen treat can be called ice cream. In fact, the U.S. Department of Agriculture has specific rules that define what can and can't be labeled "ice cream." To bear the "Meets USDA Ingredient Standard for Ice Cream" stamp, it has to contain at least 10 percent milk fat, and a minimum of six percent non-fat milk solids. A gallon has to weigh at least 4.5 pounds.

The range of milk fat (sometimes referred to as butter fat) used in ice cream can go from the minimum 10 percent to a maximum of about 16 percent. Most premium ice creams use 14 percent milk fat. Higher fat content leads to better, richer taste and a creamier texture. Ice cream makers don't go higher than 16 percent because it would be costly and very high in calories. An ice cream with this much milk fat would also taste so rich that people would probably eat it in smaller amounts, which would be bad news for people who sell ice cream for a living.

Other frozen desserts, such as sorbets, low-fat ice cream, and frozen yogurt, are not technically ice cream at all. Frozen custard is ice cream that has at least 1.4 percent egg yolk solids, and "soft serve" can be any frozen milk-based dessert that has not gone through the hardening process -- more on that later.

In terms of specific ingredients, the recipe for ice cream is simple. But in scientific terms, it's complicated stuff. Ice cream is a colloid, a type of emulsion. An emulsion is a combination of two substances that don't normally mix together. Instead, one of the substances is dispersed throughout the other. In ice cream, molecules of fat are suspended in a water-sugar-ice structure along with air bubbles. The presence of air means that ice cream is also technically a foam.

In addition to milk fat, non-fat milk solids, sugar, and air, ice cream also contains stabilizers and emulsifiers. Stabilizers help hold the air bubble structure together and give the ice cream a better texture. Although gelatin was originally used as a stabilizer, xanthan gum, guar gum, and other compounds are used today. Emulsifiers keep the ice cream smooth and aid the distribution of the fat molecules throughout the colloid. Egg yolks were once used, but ice cream manufacturers now tend to use other chemical compounds. These stabilizers and emulsifiers make up a very small proportion (less than one percent) of the ice cream.

­In the next section, we'll find out how you make ice cream.

Frozen yogurt is a popular, healthier alternative to ice cream. You might think that the manufacturing process involves simply putting some yogurt in a freezer, but actually the process is reversed. Instead of making yogurt and turning it into a frozen dessert, the bacterial cultures that make yogurt are added to ice cream mix. The resulting treat is lower in lactic acid than regular yogurt, which explains the milder taste.