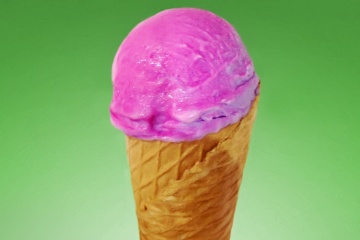 This ice cream, called Xameleon, changes colors when you lick it.
Icexperience/HowStuffWorks

An old saw among chefs and food marketers proclaims that we eat first with our eyes. Whether we're admiring the meticulous plate composition of a Michelin-starred bistro or basking in the light green of pistachio ice cream, sight whets our appetites as much as smell. This gastronomic quirk presents particular challenges for the purveyors of frozen foods, whose cardboard-wrapped wares lie in stacks behind frosty glass.

If you want to stand out in this frigid carton wilderness, you're going to need great brand recognition ... or a pretty good gimmick. It's said that the human mind is ruled by habit and novelty, so if you want to break customers' death grip on the former, you'd best ramp up the latter, whether that means offering real fruit juice, gluten freedom or a color-changing confection.

Food already changes color without our help, of course. Think of a banana ripening in your countertop fruit bowl or a steak browning as it cooks. Novelty foods that change colors as you mix or eat them might raise these natural processes to a fanciful art, but they tap into the same basic comestible chemistry and food physics. There's cereal that reveals its true hue after it's submerged in milk, as well as toothpastes and cocktails that become transparent at given temperatures or shift hues in acidic or alkaline environments [source: USPTO]. Some foods entertain in other ways, like the ice cream that glows using lick-activated jellyfish proteins [source: Harris].

The topic of color-changing ice cream heated up in July 2014 when Spanish physicist Manuel Linares and colleagues announced Xamaleon, a tutti-frutti-flavored ice cream that changes colors three times when licked. According to Linares, the trick to the treat involves temperature change and the acids in the human mouth. A quick spray of a mysterious substance he calls a "love elixir" speeds up the switch from periwinkle blue to pink and finally purple [source: Yirka].

Creating such a treat requires a keen understanding of what causes color and color changes in food, and a knack for molecular chemistry doesn't hurt, either.