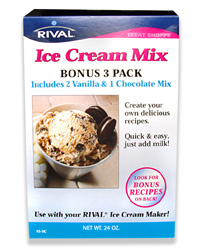 Whether it's being made in your kitchen with a hand crank, at a local homemade ice cream shop with a stand-alone ice cream maker, or in a factory that cranks out thousands of gallons of ice cream every day, the process of making ice cream is basically the same. The only difference is the scale of the operation.

First, you need ice cream mix. You can buy commercially made ice cream mix that is set to a certain milk fat content. Ice cream factories usually make their own mix by combining milk, cream and sugar in a 3,000 gallon vat, with the proportions and mixing controlled by computers. The mix is then pasteurized, or heated, to kill any harmful bacteria. If you were to make your own mix at home, you could pasteurize it by cooking it in a double boiler, or use an egg substitute or pasteurized egg product. This step is important, because otherwise people who eat your homemade ice cream could get sick due to salmonella contamination. According to the Centers for Disease Control, those most at risk include the elderly, very young children, and people with compromised immune systems [ref].

The next step in production is adding flavor to the mix. There are thousands of varieties of ice cream, so just about any combination of flavors is possible. From vanilla to cinnamon, chocolate to triple chocolate fudge brownie, it all gets blended into the ice cream mix. In a factory, this step takes place in vats that hold hundreds of gallons of ice cream, while giant steel paddles do the mixing. In your kitchen, a large bowl and a food mixer will work, or even a wooden spoon and muscle power if you want some exercise. Solid chunks such as pieces of fruit, chocolate chunks, marshmallows, and candy are added later.

The next step is where an ice cream making machine comes into play. The mix has to be simultaneously frozen and whipped. In a factory, this happens in a giant tube surrounded by pipes. The pipes contain chemicals such as ammonia that freeze the tube, but the ammonia never comes into contact with the ice cream. The ice cream mix is pumped through the tube, where it gets cold very quickly. A dasher, or blade, turns inside the tube. This whips the mixture, introducing the air bubbles that help give ice cream its structure. The dasher also scrapes the sides of the tube, clearing off ice crystals that form there. This prevents large ice crystals from ruining the flavor and texture of the ice cream. All the elements of this process are carefully monitored and controlled by computers. Most homemade ice cream shops use a batch freezer for this step, where the same process happens on a smaller scale.

This step can be accomplished at home with a rock salt/ice mixture for freezing and a hand or electric cranked dasher to mix and scrape off the ice crystals.

Photo courtesy Ed Grabianowski and Deborah Hanny With some creativity and experimentation, the flavor options are almost limitless.

Once the ice cream has come out of the ice cream maker, the process isn't finished. At this point, the mixture is frozen, but still soft. Large chunks of candy and other goodies are now added. Then the ice cream is placed into containers. Factory machines pour it straight into cartons or buckets, or it can be extruded into shapes that have wooden sticks placed into them for individual treats.

Photo courtesy Ed Grabianowski and Deborah Hanny After being drawn from the machine, the ice cream is placed into a -20 degree Fahrenheit freezer to harden.

Now the ice cream needs to be reduced to a very low temperature, zero degrees Fahrenheit or below. Factories make it even colder since they need the ice cream to stay frozen while it is packaged and loaded onto trucks. It needs to be very cold to freeze the ice cream quickly and prevent the formation of large ice crystals. This process is known as hardening. "Soft-serve" is often simply ice cream that has not gone through this process.

In the next section, we'll take a look at the business of ice cream.