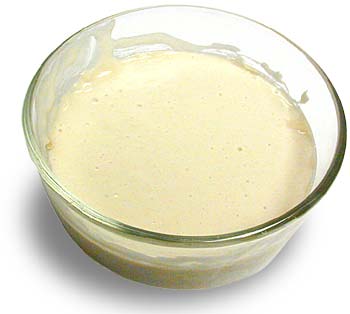 Hundreds of years ago, before there was packaged yeast, bakers used sourdough starter to keep a supply of yeast alive and handy. They kept a pot of live culture in a flour/water medium, and "fed" it daily or weekly so that the yeast remained alive and active. To understand how sourdough starter works, let's look at how you can create a batch of starter using live yeast that is floating in the air!

To perform this experiment you will need:

To start a culture, mix two cups of flour and two cups of water in a glass or pottery bowl (in the old days, a baker probably had a special clay crock for starter). Lay a cloth over the top and let it sit on the kitchen counter. It turns out that there is yeast floating in the air all around us all the time, and some of this yeast will make its way to your flour/water mixture. It will then start growing and dividing.

After 24 hours, you pour off about a cup of the mixture and feed it with another cup of flour and another cup of water. In a few days, the mixture will become frothy as the yeast population grows. The froth is caused by the carbon dioxide that the yeast is generating. The starter will also have a bacteria, lactobacilli, in it. This lends to the slightly acidic flavor of the bread by creating lactic acid! The alcohol that the yeast creates and the lactic acid together are the source of sourdough bread's unique flavor!

A common question at this point is, "why doesn't the flour get infested with all sorts of mold and bacteria and become a disgusting health hazard????" For example, if you put a bowl of sugar water or orange juice out on the counter, that is exactly what would happen. It turns out that the starch in bread flour is something that not a lot of bacteria can easily handle, while sugar is (see How Food Works for some details). Yeast, on the other hand, creates special enzymes to deal with starch. The yeast and lactobacilli also "poison" the culture with the alcohol and lactic acid they produce, and that keeps other bacteria out.

Leave the starter on the kitchen counter for five days. As the starter ferments, it will develop a strong aroma -- bready and alcoholy and not particular appetizing. Feed it every day or two by dividing it in half and adding a cup of flour and a cup of water to one half of it (you can throw the other half away). When you see a watery substance floating to the top, stir it. Sourdough bakers call this "hooch." Over the week the starter became a thick liquid, like pancake batter. It will be slightly yellowish.

At this point you can do one of two things:

If you don't like the "wild yeast floating in the air" idea, there are other ways to start a starter:

Some starters use milk instead of water, and some starter recipes call for sugar or honey, which boosts the fermentation. There are starters that use potatoes, too. Potatoes have starch in them, and that supplies more sugar for the yeast to feast on.

When it comes time to bake bread, you add a cup of this live culture to the dough to provide the yeast needed to leaven the bread. You replenish the pot by adding back an equal amount of flour and water, and regular feeding keeps the culture alive.