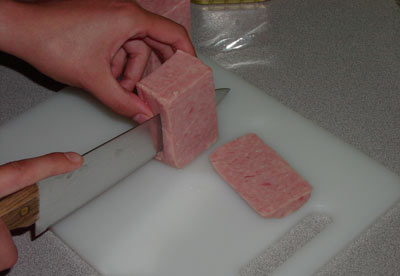 Spam is produced in two facilities in North America: one in Austin, Minn., and the other in Fremont, Neb. The highly automated Spam process requires only 13 workers to keep it running smoothly [source: Wyman]. Pig pieces arrive at the plant, where machines remove the pork from the bone and the ham is trimmed by hand. The meat is ground up in 8,000-pound batches, then flash-cooled and blended with the other ingredients in airtight mixers [source: Wyman]. The Spam is piped to a conveyor belt and pumped into the cans, which are sealed shut.

The Spam-filled cans are then moved into a massive cooker. It's six stories tall and holds 66,000 cans of Spam at a time [source: Wyman]. The cans (and the Spam inside the cans) are heated to the point that all bacteria are killed. Then they are washed and allowed to cool. On the way out of the cooker, a plastic label is applied to each can. The cans are boxed, crated and trucked off to stores nationwide. Outside of North America, Hormel licenses the Spam name and recipe to companies that manufacture and sell it in various international markets.

Is­ Spam Good for You?

The short answer: no. Spam is not a healthy thing to eat. A 12-ounce can contains six servings. A single serving holds 16 grams of fat, including six grams of saturated fat. One serving also holds 33 percent of your daily recommended allowance of sodium and a pretty hefty dose of cholesterol. While the reduced sodium and lite versions obviously contain less of the bad stuff, a Spam-heavy diet wouldn't be a good idea.

In fact, some research suggests that Spam (and other processed meats) might increase the risk of cancer. A study by the University of Hawaii found that people who consumed large amounts of processed meat were 67 percent more likely to develop pancreatic cancer. Poultry and dairy consumption was not linked to cancer increases, so fat and cholesterol levels could not be the sole culprit. The researchers suggested that the chemicals used in meat processing may react and form carcinogenic byproducts in the body [source: Nothlings et al]. Sodium nitrite, used in Spam, is one of the most common meat-processing chemicals. Scientists haven't found a definite link between sodium nitrite and cancer, though, so the FDA still considers it safe.

If you're a Spam fan, make a pilgrimage to Austin, Minn., Spam's hometown. You can explore Spam history in the free, 16,500-square-foot Spam Museum and catch the Spama-rama festival, held every April.