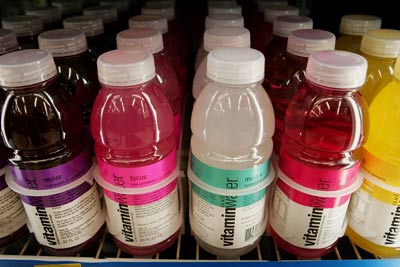 The Coca-Cola Company has purchased Glaceau, the makers of Vitaminwater, for $4.1 billion.
© Scott Olson/Getty Images

Water and vitamins are two of the most essential substances available to us. They keep us alive and maintain our health by performing important functions within our bodies. Without them, deficiencies arise and our bodies react negatively. So, what if these two substances joined forces to give us a singularly awesome elixir of pure life?

This is exactly what Glacéau has tried to make. The company formed in 1996 to become, according to their Web site, a "pioneer of the enhanced water category." They have developed a massive line of bottled drinks called "Vitaminwater" that combine distilled water with vitamins, herbs and flavors.

The company's timing has been perfect. As scientists better understand the biological and chemical complexities of our bodies, the general public is becoming increasingly health conscious. Along with exercise habits and our genes, what we eat and drink largely determines the quality of our health. People are willing to try anything that advertises healthy living, and Americans spend $750 million a year on energy drinks alone. [source: NewsTarget.com]

With smart advertising, sleek bottle designs and a huge variety of flavors and styles with hip, lowercase names -- some of the choices include "endurance," "power-c" and "vital-t" -- many Americans are buying into what looks like a healthy alternative to other kinds of questionable energy drinks. Even controversial rapper 50 Cent sponsors the drinks with his own flavor, "formula 50," and other celebrities such as Kelly Clarkson and Shaquille O'Neal also promote Vitaminwater.

But is Vitaminwater really as good as it sounds? Some scientists believe that Vitaminwater and many other enhanced energy drinks don't provide all the health benefits the companies advertise. In this article, we'll discuss the functions of water and vitamins in the body. We'll also take a look at the nutrition label on a bottle of Vitaminwater -- and see if it does what it says it does.