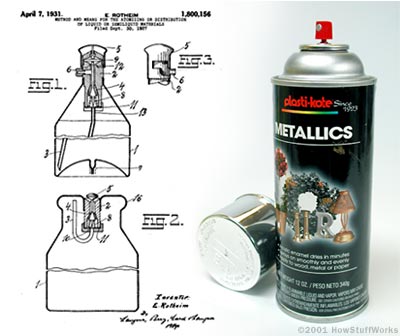 You've probably never heard of Eric Rotheim, but you're undoubtedly familiar with his work. Rotheim, a Norwegian engineer and inventor, came up with the first aerosol-can design more than 75 years ago. The technology has evolved somewhat over the years, but the illustrations in Rotheim's 1931 U.S. patent do show most of the major elements found in today's aerosol spray cans.

Initially, Rotheim's innovation didn't have much of an impact on the world. It wasn't until World War II, when the U.S. military introduced an aerosol can for dispensing insecticide, that people fully realized the potential of the device. The easy-to-use cans were an invaluable aid for soldiers in the Pacific, where disease-carrying insects posed a deadly threat.

In the years after the war, manufacturers adapted this technology for a wide range of applications. Today, there are thousands of products packaged in aerosol cans -- everything from hair spray to cooking oil to medicine. In this edition of HowStuffWorks, we'll examine the basic principle behind these devices as well as the major mechanical elements at work inside.

A Few Words About Fluids 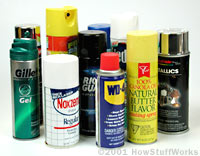 Aerosol cans come in all of shapes and sizes, housing all kinds of materials, but they all work on the same basic concept: One high-pressure fluid expands to force another fluid through a nozzle.

The basic idea of an aerosol can is very simple: One fluid stored under high pressure is used to to propel another fluid out of a can. To understand how this works, you need to know a little about fluids and fluid pressure.

An aerosol can applies these basic principles toward one simple goal: pushing out a liquid substance. In the next section, we'll find out exactly how it does this. 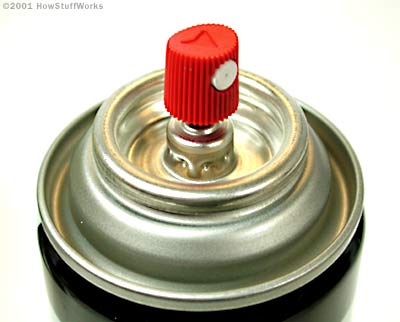 The plastic head on an aerosol can pushes down on a small valve, allowing the pressurized contents of the can to flow to the outside.

An aerosol can contains one fluid that boils well below room temperature (called the propellant) and one that boils at a much higher temperature (called the product). The product is the substance you actually use -- the hair spray or insect repellent, for example -- and the propellant is the means of getting the product out of the can. Both fluids are stored in a sealed metal can.

There are two ways to configure this aerosol system. In the simpler design, you pour in the liquid product, seal the can, and then pump a gaseous propellant through the valve system. The gas is pumped in at high-pressure, so it pushes down on the liquid product with a good amount of force. You can see how this system works in the diagram below.

In this can, a long plastic tube runs from the bottom of the can up to a valve system at the top of the can. The valve in this diagram has a very simple design. It has a small, depressible head piece, with a narrow channel running through it. The channel runs from an inlet near the bottom of the head piece to a small nozzle at the top. A spring pushes the head piece up, so the channel inlet is blocked by a tight seal.

When you push the head piece down, the inlet slides below the seal, opening a passage from the inside of the can to the outside. The high-pressure propellant gas drives the liquid product up the plastic tube and out through the nozzle. The narrow nozzle serves to atomize the flowing liquid -- break it up into tiny drops, which form a fine spray.

Essentially, this is all there is to a simple compressed-gas aerosol can. In the next section, we'll look at the more popular liquefied gas design, which is just a little more elaborate.

Why a Curved Bottom?

In most aerosol cans, the bottom curves inward. This serves two functions:

In the last section, we looked at the simplest aerosol-can design, which uses compressed gas as a propellant. In the more popular system, the propellant is a liquefied gas. This means that the propellant will take liquid form when it is highly compressed, even if it is kept well above its boiling point.

Since the product is liquid at room temperature, it is simply poured in before the can is sealed. The propellant, on the other hand, must be pumped in under high pressure after the can is sealed. When the propellent is kept under high enough pressure, it doesn't have any room to expand into a gas. It stays in liquid form as long as the pressure is maintained. (This is the same principle used in a liquid propane grill.)

As you can see in the diagram below, the actual can design in this liquefied-gas system is exactly the same as in the compressed-gas system. But things work a little bit differently when you press down the button.

­ When the valve is open, the pressure on the liquid propellant is instantly reduced. With less pressure, it can begin to boil. Particles break free, forming a gas layer at the top of the can. This pressurized gas layer pushes the liquid product, as well as some of the liquid propellant, up the tube to the nozzle. Some cans, such as spray-paint cans, have a ball bearing inside. If you shake the can, the rattling ball bearing helps to mix up the propellant and the product, so the product is pushed out in a fine mist.

When the liquid flows through the nozzle, the propellant rapidly expands into gas. In some aerosol cans, this action helps to atomize the product, forming an extremely fine spray. In other designs, the evaporating propellant forms bubbles in the product, creating a foam. The consistency of the expelled product depends on several factors, including:

Manufacturers are able to produce a wide variety of aerosol devices by configuring these elements in different combinations. But whether the can shoots out foamy whipped cream, thick shaving gel or a fine mist of deodorant, the basic mechanism at work is the same: One fluid pushes another.

To learn more about aerosol cans, as well as the chemicals used inside them, check out the links on the next page.

Many propellants are flammable, so it's dangerous to use aerosol cans around an open flame. Otherwise, you might end up with an accidental flamethrower. Another possible danger is inhalation: Some aerosol cans, such as whipped-cream containers, use nitrous oxide, which can be harmful if inhaled in mass quantities. To learn more about the propellants used in aerosol cans, check out this site.

Up until the 1980s, a lot of liquefied-gas aerosol cans used chlorofluorocarbons (CFCs) as a propellant. After scientists concluded that CFCs were harmful to the ozone layer, 70 nations signed the Montreal Protocol, an agreement to phase out CFC use over the next decade. Today, almost all aerosol cans contain alternative propellants, such as liquefied petroleum gas, which do not pose as serious a threat to the environment.