The Sickest of the Sick 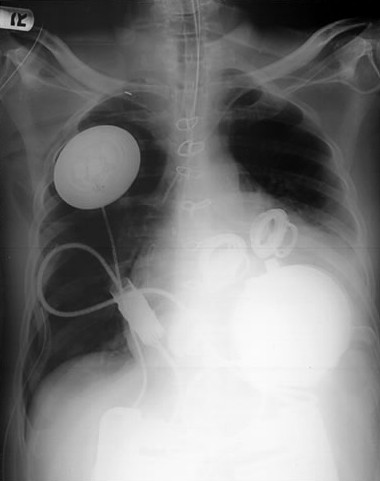 The U.S. Food and Drug Administration (FDA) has allowed Abiomed to perform 15 implants as part of a clinical trial. Twelve of the proposed 15 surgeries have been done. These surgeries have taken place at medical centers in Houston, Los Angeles, Boston and Philadelphia. The FDA has been reviewing the results of these transplants on a case-by-case basis to determine the future of the AbioCor device. If the $70,000 to $100,000 device is successful, meaning it can prolong the life of a patient without complications, it could be approved for use in more heart centers around the United States. In fact, several news agencies report that Abiomed will seek approval from the U.S. Food and Drug Administration this year to sell the AbioCor heart. The device will be used to treat patients with end-stage heart failure under what is known as a "Humanitarian Device Exemption."

Laman Gray said that initial candidates for the heart will be the "sickest of the sick." FDA and Abiomed officials have laid a few parameters for who can become one of the initial recipients of the artificial heart. The patient must fit the following profile:

Another requirement is that the grapefruit-sized device must fit inside the patient's chest. To determine the fit of the device, the patient must undergo a CAT scan and chest X-ray. Then, using a computer-aided design (CAD) program, the natural heart is virtually removed and the AbioCor heart is virtually placed in the patient's chest. If the computer program shows that the device will fit, doctors can proceed with the operation to implant the artificial heart.

For nearly two months following the surgery, hospital and AbioMed officials kept the name of the first recipient a secret. However, on August 21, 2001, it was revealed that Robert Tools, a Kentucky resident and former telephone company employee, was the history-making patient. Although Tools has battled an infection and needed a ventilator following his surgery, his doctors report that the mechanical heart continues to function without problems.

Here is what was known about Tools prior to his surgery:

Currently, there are between 2 million and 3 million Americans living with heart failure, and 400,000 new cases are diagnosed annually. Heart failure causes 39,000 deaths per year, according to the National Heart, Lung, and Blood Institute (NHLBI). Most people diagnosed with heart failure can expect to live about five years, and will usually need to have a heart transplant to extend their life.

In the United States alone, 2,143 heart transplants were performed in 2003. However, thousands of potential recipients die annually while waiting for a heart transplant. Doctors still encourage the public to become organ donors, but the AbioCor may save many of those who don't have the option of a natural transplant or of waiting for an available heart.

For more information on the AbioCor and related topics, check out the links below.