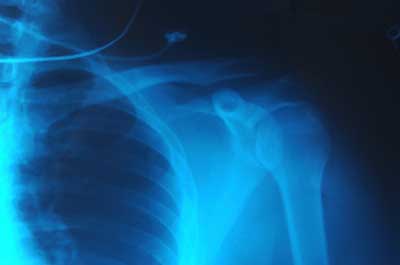 ©iStockphoto.com/Mostly Mozart
X-ray technology has allowed us to see inside the human body since 1895. See more modern medicine pictures.

As with many of mankind's monumental discoveries, X-ray technology was invented completely by accident. In 1895, a German physicist named Wilhelm Roentgen made the discovery while experimenting with electron beams in a gas discharge tube. Roentgen noticed that a fluorescent screen in his lab started to glow when the electron beam was turned on. This response in itself wasn't so surprising -- fluorescent material normally glows in reaction to electromagnetic radiation -- but Roentgen's tube was surrounded by heavy black cardboard. Roentgen assumed this would have blocked most of the radiation.

Roentgen placed various objects between the tube and the screen, and the screen still glowed. Finally, he put his hand in front of the tube, and saw the silhouette of his bones projected onto the fluorescent screen. Immediately after discovering X-rays themselves, he had discovered their most beneficial application.

Roentgen's remarkable discovery precipitated one of the most important medical advancements in human history. X-ray technology lets doctors see straight through human tissue to examine broken bones, cavities and swallowed objects with extraordinary ease. Modified X-ray procedures can be used to examine softer tissue, such as the lungs, blood vessels or the intestines.

In this article, we'll find out exactly how X-rays machines pull off this incredible trick. As it turns out, the basic process is really very simple.