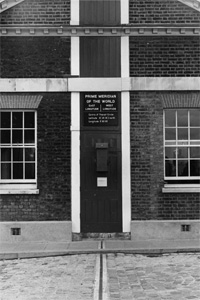 There it stands at Greenwich, London, the famous Prime Meridian of the world, the basis for all maps and time calculations.
Harry Todd/Fox Photos/Getty Images

Advocates of daylight saving time have always pointed to energy conservation as the most important reason to move clocks forward during summer months. Here's the theory: Because 25 percent of all electricity consumed goes to powering lamps and small appliances, having more daylight hours for at least half the year should reduce the amount of electricity we use for lighting and running TVs, DVD players and stereos [source: Aldrich]. Also, DST should serve as an incentive for people to spend more time outdoors. In other words, there's more daylight available after school and work to go for a walk, play tennis or hit the links. If people are outside, they're not inside turning on lamps, appliances and electronics.

It wasn't until the early 1970s, however, that the power-conservation theory was put to the test. As part of the Emergency Daylight Saving Time Energy Conservation Act of 1973, initiated because of the Arab oil embargo, the U.S. Department of Transportation was required to study the effect of DST on electricity demand. To do this, researchers analyzed electricity load data from 22 different utilities for a period of days before and after transitions in and out of DST. Their report, published in 1975, found that daylight saving time reduced national electricity usage by roughly 1 percent compared with standard time.

This study stood as gospel for years, with little research conducted to support or refute it. Then, in May 2001, the California Energy Commission spearheaded a study to analyze the effects of winter DST and double daylight saving time (a two-hour time shift) on the state's electricity usage. The study concluded that winter DST would cut winter peak electricity use by 3.4 percent. Summer double DST would result in smaller reductions, but would still be beneficial because it would shift electricity use from high-demand afternoon hours to low-demand morning hours. The U.S. Department of Energy (DOE) reported similar findings in 2008 after conducting research as part of the Energy Policy Act of 2005. According to DOE data, DST resulted in total electricity savings of about 1.3 terawatt-hours, or 0.03 percent of electricity consumption over the year.

The benefits of daylight saving time go beyond energy conservation, if you believe its supporters. Advocates of the practice argue that allowing drivers to return home in the daylight reduces traffic accidents during the evening rush hour. They also suggest that DST prevents crime because it limits a person's exposure to criminals, who usually conduct their business under the cloak of darkness. Finally, the sports and recreation industries are rabid fans of daylight saving time. In 1986, for example, representatives of the golf industry lobbied for extended DST, arguing that an extra month of DST was worth up to $400 million annually in extra sales and fees [source: Choi].

Not everyone is so keen to manipulate time. Some say the studies described above are flawed, or they point to other, contradictory research suggesting DST should be eliminated altogether. We'll examine some of the evidence next.