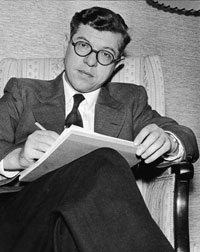 Astronomer Fred Hoyle is responsible for the term "big bang," although he used it as a dismissive term. See more Milky Way pictures.
Express Newspapers/Getty Images

For centuries, humans have gazed at the stars and wondered how the universe developed into what it is today. It's been the subject of religious, philosophical, and scientific discussion and debate. People who have tried to uncover the mysteries of the universe's development include such famous scientists as Albert Einstein, Edwin Hubble and Stephen Hawking. One of the most famous and widely accepted models for the universe's development is the big bang theory.

Another misconception is that the big bang was a kind of explosion. That's not accurate either. The big bang describes the expansion of the universe. While some versions of the theory refer to an incredibly rapid expansion (possibly faster than the speed of light), it's still not an explosion in the classic sense.

Summing up the big bang theory is a challenge. It involves concepts that contradict the way we perceive the world. The earliest stages of the big bang focus on a moment in which all the separate forces of the universe were part of a unified force. The laws of science begin to break down the further back you look. Eventually, you can't make any scientific theories about what is happening, because science itself doesn't apply.

So what's the big bang theory in a nutshell? Find out in the next section.

What is a Theory

In science, a theory is an attempt to explain a particular aspect of the universe. Theories can't be proven, but they can be disproven. If observations and tests support a theory, it becomes stronger and usually more scientists will accept it. If the evidence contradicts the theory, scientists must either discard the theory or revise it in light of the new evidence.