In 1947, an inventor named Edwin Land introduced a remarkable innovation to the world -- a film that developed itself in a matter of minutes. This new instant camera technology was a huge success for Land's company, the Polaroid Corporation. In 1949, Polaroid made more than $5 million in camera sales alone! Over the proceeding 50 years, the company carved out its own special niche, selling millions of instant cameras and more than a billion rolls of instant film.

In this article, we'll find out what's actually happening inside instant film while you're waiting for the image to appear. While it may seem like magic, the process is really very simple.

Instant camera film is pretty much the same thing as regular camera film, with a few extra elements. Before we get to those crucial additions, let's briefly examine film photography in general.

The basic idea of film is to capture patterns of light using special chemicals. The camera briefly exposes the film to the light coming from a scene (typically for a small fraction of a second), and where the light hits the film, it starts off a chemical reaction.

To turn this into a picture, you have to develop the film using more chemicals. One chemical developer turns the exposed particles into metallic silver. The film is then treated with three different dye developers containing dye couplers. The three dye colors are:

Developed color film has a negative image -- the colors appear opposite of the colors in the original scene. In slide film, the two dyes that attach to the unexposed area combine to form the color captured at the exposed layer. For example, if the green layer is exposed, yellow and cyan dye will attach on either side of the green layer, but the magenta dye will not attach at the green layer. The yellow and cyan combine to form green. (For more in-depth informa­tion on the entire process, see How Cameras Work and How Photographic Film Works.)

The instant-camera developing process combines colors in the same basic way as slide film, but the developing chemicals are already present in the film itself. In the next section, we'll see how the developers are combined with the color layers to form the picture. 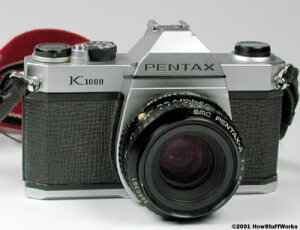