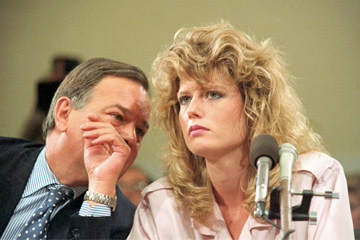 Fawn Hall and her attorney on June 9, 1987, at the Iran-Contra hearings – after she became a paper-shredding legend.
© Bettmann/CORBIS

Let us open our scene on a powerful U.S. National Security Council staffer with an authoritative military rank. While Department of Justice officials (quite literally around the corner) search for clues about the biggest diplomatic scandal to hit Washington in ages, the staffer enlists his glamorous secretary Fawn Hall (who might as well have been named by Ian Fleming) to help him destroy evidence that incriminates him in the scandal.

You can tell it's not a spy novel because the lead role is played not by a suave lothario, but rather by a bulky character that jams under too much pressure. The paper shredder will never order a martini, shaken or stirred.

But it was the paper shredder that took the spotlight during the Iran-Contra hearings in 1987, when then-Lt. Col. Oliver North testified to the foot-and-a-half (46-centimeter) stack of memos he and his secretary Fawn Hall (really now) desperately fed into its iron teeth [source: Benac].

Which brings us to the rather unfair treatment shredders receive in the media. Much like an aggressive pet that's blamed for its owner's bad training, the paper shredder is seen as a tool for corruption, greed and general bad behavior. But the machine, of course, can be used for good, at the very least, and against bad guys at best: No paper-loving identity thief will get away with snatching your PIN and bank account number with a shredder around, after all.

It's not like governments only use shredders for no good; in fact, shredding is so necessary to government work that the U.S. National Security Agency evaluates paper shredders to ensure employees are using machines that cut to its standard for particle size -- no larger than 1 millimeter by 5 millimeters [source: SEM]. A small shredder that meets NSA standards will set you back a few hundred dollars. A Kobra Cyclone that shreds 500 sheets at once with varying levels of particle sizes? Somewhere around $20,000-$30,000 [source: Mono Machines].

A little rich for a machine that rips things up? Let's zip back to a time when shredders were decidedly lower-tech.