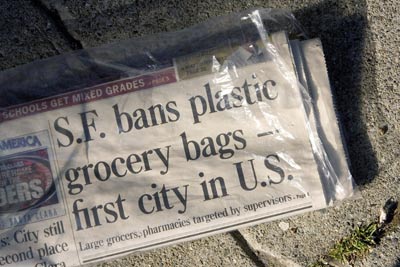 As you wrap­ up your weekly grocery shopping and get in line at the supermarket, it's time for yet another difficult choice. The cashier mechanically spouts at you, "Paper or plastic?" referring to what kind of bag you'd prefer. For some people, it's a stressful decision. Convenience is pulling you toward plastic, but a nagging green conscience might automatically pull you toward pa­per. However, it's raining, and if your paper bags break, it could ruin your purchases. On the other hand, is it selfish to put immediate convenience over the thousands of years it might take for a plastic bag to degrade in a landfill? But, what a minute -- aren't we encouraged to save the trees and avoid overusing paper?

­Consumer consciences aren't the only ones plagued by the "paper or plastic" question. Grocery stores pay less for plastic bags but get pressure from environmental groups to stop offering them. So, retailers and even entire cities are deciding to stop asking the familiar question. Instead, they're making the decision for us. Touting environmental concerns, the grocery store chain Whole Foods stopped giving out plastic bags in 2008. Entire cities like San Francisco and Oakland, have passed measures restricting -- or even banning -- the use of plastic bags in grocery stores.

In response to Oakland's ban, an organization backed by plastic manufacturers is suing the city. The Coalition to Support Plastic Bag Recycling claims that the city failed to do enough research into the repercussions of such a ban. The suit isn't on the grounds that a ban will wreak havoc on plastic profits, but rather on the environment. The coalition claims that plastic is just as green as paper or, perhaps more accurately, paper is just as harmful to the environment as plastic [source: Heredia]. It contends that replacing plastic bags with paper will cause more harm than good to the planet.

So, what's it gonna be: paper or plastic? Both come with distinct disadvantages to the environment, which we lay out next.