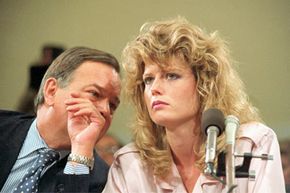 Fawn Hall and her attorney on June 9, 1987, at the Iran-Contra hearings – after she became a paper-shredding legend.
© Bettmann/CORBIS

Let us open our scene on a powerful U.S. National Security Council staffer with an authoritative military rank. While Department of Justice officials (quite literally around the corner) search for clues about the biggest diplomatic scandal to hit Washington in ages, the staffer enlists his glamorous secretary Fawn Hall (who might as well have been named by Ian Fleming) to help him destroy evidence that incriminates him in the scandal.

You can tell it's not a spy novel because the lead role is played not by a suave lothario, but rather by a bulky character that jams under too much pressure. The paper shredder will never order a martini, shaken or stirred.

But it was the paper shredder that took the spotlight during the Iran-Contra hearings in 1987, when then-Lt. Col. Oliver North testified to the foot-and-a-half (46-centimeter) stack of memos he and his secretary Fawn Hall (really now) desperately fed into its iron teeth [source: Benac].

Which brings us to the rather unfair treatment shredders receive in the media. Much like an aggressive pet that's blamed for its owner's bad training, the paper shredder is seen as a tool for corruption, greed and general bad behavior. But the machine, of course, can be used for good, at the very least, and against bad guys at best: No paper-loving identity thief will get away with snatching your PIN and bank account number with a shredder around, after all.

It's not like governments only use shredders for no good; in fact, shredding is so necessary to government work that the U.S. National Security Agency evaluates paper shredders to ensure employees are using machines that cut to its standard for particle size -- no larger than 1 millimeter by 5 millimeters [source: SEM]. A small shredder that meets NSA standards will set you back a few hundred dollars. A Kobra Cyclone that shreds 500 sheets at once with varying levels of particle sizes? Somewhere around $20,000-$30,000 [source: Mono Machines].

A little rich for a machine that rips things up? Let's zip back to a time when shredders were decidedly lower-tech.

Although we can't say when people started needing paper shredders for getting rid of important secrets, we do know that in 1909 Abbot Augustus Low filed the first United States patent for a shredder-like "waste-paper receptacle." He stated the receptacle's purpose was "for disposing of waste paper and is designed more particularly for use in offices and other places where not only the collection and storage of waste paper is desirable, but also its cancellation or mutilation in such manner as to render it unavailable or unintelligible for re-use or for information" [source: Low].

Using a cutting or grinding device, Low's invention ensured that papers would be sliced to bits before they fell into the bin. He gave provisions for operating it either by electric motor or by a crank. He even made sure to mention his automatic stop system for the motor: Two electric switches completed a circuit when paper was fed through, enabling the motor to run. When the paper ran out, the second switch broke the circuit and the device stopped.

So we all started using paper shredders posthaste in 1909, right? Nope, not at all. Although Double-A Low (not his real nickname) was the genius behind it, the machine was never marketed to a large audience, and the nascent paper-shredding industry sat in the wings, methodically plotting its eventual domination of every accountant's office.

Around 1935, German toolmaker Adolf Ehinger applied for a German patent on his version of the paper shredder. Ehinger was a better businessman than Low, though, and during the post-World War II era, found quite the niche marketing the shredders to the usual suspects: government, military and financial institutions.

Can you guess what big, global event that spawned countless spy films, conspiracy at the highest (and lowest) level, and general shady, secret dealings eventually made the paper shredder the new must-have gift for any government operative? That's right, it was the Cold War of the 1950s when the devices really started being marketed aggressively. How else would you write the feverish climax of a classic espionage novel if there weren't some papers to be frantically shred, just as the Russians were trying to knock down the door?

We'll check back to see how the shredder flourished in more recent popular culture and history, but first let's take a look at how shredders actually work. (And then destroy all evidence we did.)

While we're used to seeing shredders used for nefarious purposes, Adolf Ehinger's first paper shredder (based on a hand-crank pasta maker) was actually used for a really, really good thing: Ehinger covertly printed anti-Nazi material in the 1930s, and a neighbor found scraps of it. Needing a secure way to destroy leftovers, he invented the hand-cranked paper shredder [source: Woestendiek].

Shredders: Sinking Their Teeth Into Your Personal Info 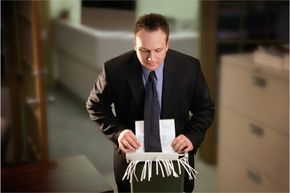 Let those teeth grab hold of your docs, not your ties, your hair or your fingers.
Design Pics/Thinkstock

It seems quite easy; paper shredders work by putting a paper in it. The little teeth eat it up. When the paper is done being chomped, it stops. There you are!

But when you actually get into the logistics, you can start to get lost. How does the machine know when paper is in it? How does it know when the paper stops? Would it do the same thing to -- say -- my hair, if it had the chance?

Let's get the basics down first, and talk about the smaller shredders we're used to seeing around the office. Shredders usually either cut the paper into strips or confetti-like squares. The paper shredder itself usually consists of a receptacle or bin where the shredded bits of material land. The top of the bin is fitted with a lid where the paper is fed into a slot. Strip-cut shredders may use rotating knives to cut the paper, while cross-cut shredders may use two sets of teeth that rotate in opposite directions to get a much smaller, square particle [source: Dahle Shredder]. When paper (or another object) touches the cutting head, a sensor activates and the sharp teeth or knives rotate and pull the paper into their jaws until the paper lies pathetically in pieces in the bin. Keep in mind that there's another set of sensors on the bottom of the lid; when the machine rests on top of the bin, it activates those bottom sensors, which then turn on the sensors that rotate the teeth.

In other words, the machine head must be firmly in place for the device to work properly, which is a fail-safe against it turning into a land-based "Jaws" before being properly in place. Even more helpful, a lot of shredders have an emergency shutoff feature that allows you to turn off the power to the teeth quickly.

Big, industrial shredders work much the same way. But instead of feeding a paper (or stack of papers) in at a time, they'll generally have a large hopper that you can toss documents into. These machines are quite a bit bigger, so they can grab larger materials with the teeth that pull them through. A lot like the small paper shredder, just on a larger scale.

And the scale does get large. Think about all the reasons we need not just paper shredders, but material shredders: Ever wonder how our garbage gets packed tightly into neat bales to make room on cargo ships or landfills? They go through shredders first. Or what about breaking down plastics for recycling? Shred 'em first. Naturally, even wood chips for playgrounds need to be shredded.

Clearly, the most famous shredder in popular culture would have to be the villain Shredder from "Teenage Mutant Ninja Turtles." But since our scope is limited to machines, let's just stick to how document shredders have shown up throughout history and in the media.

And where better to start than Watergate? It was there that G. Gordon Liddy probably not so fondly recalled "shredding stuff left and right" with a Shredmaster 400 model [sources: Benac, Woestendiek]. He later went to prison for more than four years for his part in covering up -- or ripping to shreds -- evidence of the 1972 break-in of the Democratic National Committee headquarters.

As we said earlier, during the Iran-Contra hearings, Oliver North said he used a shredder right outside the door where Department of Justice officials were poring over his papers. In a story familiar to most users of paper shredders, his machine even jammed. (North really should've upgraded to a better model; his $7,500 Intimus might have chewed one piece of paper into 10,000 pieces of confetti in a second, but you could only feed 12 pieces of paper at a time [source: Dean and Krier]

The Iranian hostage crisis of 1979 also featured a shredder. The Americans had shredded a load of documents, which the Iranians found and pieced together using -- get this -- experts in Persian carpet-weaving. (They were in the old-school vertical strip form.) After that, the government demanded agencies have strict standards for particle shred size [source: Woestendiek].

After Enron's collapse in 2002, paper shredders again made headlines when both Enron and Arthur Andersen (Enron's auditor) were accused of shredding internal documents. Andersen officials later had their conviction of obstruction of justice overturned after the U.S. Supreme Court found the jury's instructions for conviction too vague.

One now waits with bated breath to see what corrupt/shady/inappropriate action will bring paper shredders back into the spotlight. Corrupt politician? Sneaky CEO? Suave yet dastardly spy looking to destroy proof of a double-agent status? Who knows. But to learn a lot more information about paper shredders, allow yourself to be fed into the machine of the next page.

This Bag Is on Fire

If you want a non-shredding way to get rid of documents, consider two standbys -- water and fire. Douse papers into disintegration, or burn them into oblivion. The government uses burn bags. No, they don't explode into flame on contact, but they're a handy paper bag to store material in before being obliterated.

I have to mention John Woestendiek's extremely well-researched and engaging feature about the history of paper shredders, published in the Baltimore Sun. I stumbled on it during my first few hours of research, and it made my formerly ho-hum attitude toward shredders morph into enthusiasm for their place in history. Check it out for more detail and history behind the much-maligned machines. 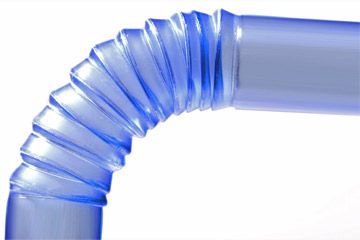 Up Next
How are bendy straws made?
Explore More 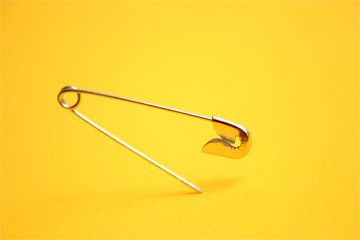 You May Like
Who invented the safety pin?
Explore More 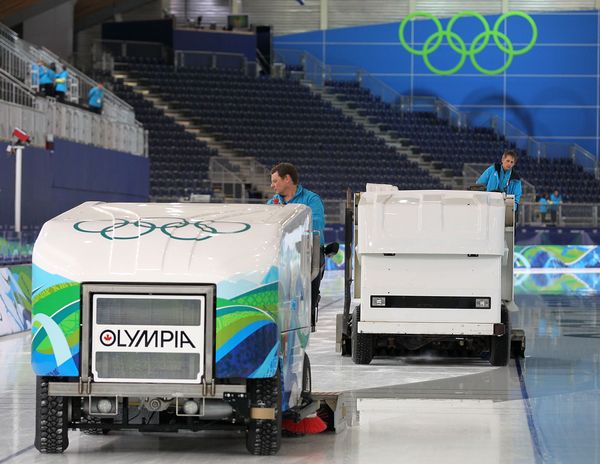