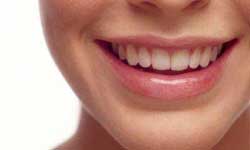 Nicolas Eveleigh/Digital Vision/Getty Images In the past few years, tooth-whitening has exploded as the physical upgrade of choice.

In this article, we'll explain how years of coffee, wine, soda and other unsightly stains can be removed quickly, safely, and with minimal discomfort.

Before we get into the details of tooth-whitening, let's take a minute to meet the enemy. What are tooth stains anyway?

Each of your teeth is made up of an inner dentin layer and a hard outer enamel layer, which protects the teeth. When you put stuff in your mouth -- food, cigarette smoke, coffee, etc. -- another layer gradually forms on top of the enamel layer. Basically, the foreign material accumulates to form a pellicle film over the enamel layer.

A dentist can clean away this film, through scraping and chemical treatments. Even brushing your teeth can knock out some of it -- brushing with the abrasive toothpaste cleans the tooth in the same sort of way scrubbing with an abrasive pad cleans a dish. "Whitening toothpastes" are designed to work even harder on this layer.

The problem is, as this pellicle layer sits on your teeth for years and years, the foreign material gets into the enamel. The enamel layer is made up of hydroxyapatite crystals, which form microscopic hexagonal "rods." Simply put, enamel is porous, which means staining agents can work their way down into the tooth, where you can't simply scour them away. The deeper stains are basically harmless, but many people find them unattractive.

This is where true tooth whiteners come in. Basically, the whiteners use bleaching chemicals to get down into the tooth enamel and set off a chemical reaction (specifically, an oxidation reaction) that breaks apart the staining compounds.

There are a number of different ways of setting off this basic process. Let's look at the main options. 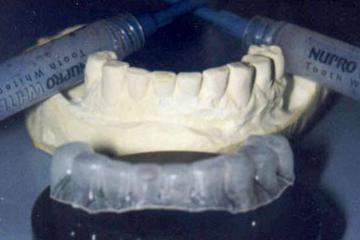 Dentist-supervised tooth whitening involves the controlled use of carbamide or hydrogen peroxide, tailored to a particular patient. Dentists may administer in-office treatments or at-home treatments.

Before the tooth whitening treatment, most dentists clean the teeth, fill any cavities, and make sure the patient's gums are healthy.

Most in-office systems use 15 to 35 percent hydrogen peroxide gels, sometimes coupled with a high intensity light to expedite the bleaching chemical reaction. (Some recent research has questioned the need and effectiveness of the light source used during in-office tooth whitening.)

The in-office procedure involves the dentist gently cleaning your teeth with pumice and then putting a protective barrier on the gums. The dentist then places hydrogen peroxide paste on the teeth for several minutes, rinses it off, and usually reapplies it several times. The procedure can achieve about four to six shades of whitening after only one 40-minute treatment.

To begin the at-home procedure, the dentist takes impressions (molds) of your mouth, and then has soft, custom mouth trays made. To administer the treatment, the you put a thin ribbon of the gel into the tray and wears it for two hours during the day, or while sleeping. Most whitening occurs in one to two weeks. In difficult cases, trays may need to be worn for up to six weeks.

A combination of in-office and at-home systems can achieve up to 12 to 15 shades of whitening in most patients. At-home systems used alone can obtain similar results, but may take longer. These procedures are considered safe and effective when monitored by a dentist.

Dentist supervised systems have advantages and disadvantages when compared to over-the-counter tooth whitening products. The main advantage of the dentist supervised system is that the dentist can help determine if tooth whitening should be performed and if it will be effective for the patient. Patients with decayed teeth, infected gums, white spots on their teeth, and multiple tooth colored fillings or crowns (caps) on the front teeth may not be good candidates for tooth whitening.

The dentist can also help decide what type of tooth whitening is required (in-office, at-home or both) and the concentration of the whitening gels. The dentist can monitor and treat patients who experience sensitivity to the whitening agents and modify the procedure for those who are having difficulty getting optimal results. Finally, the dentist can help the patient explore other cosmetic dental options such as porcelain or resin veneers, tooth colored fillings, gum lifts and tooth shaping used with or without tooth whitening. With the help of the dentist, the patient's cosmetic dental goals may be more easily attained.

The disadvantages of dentist supervised whitening systems include higher cost and longer time required to get started. The in-office and at-home tooth whitening systems can cost between $300-$1,000 (sometimes more). In most cases, at-home systems cost less than the in-office systems. With the dentist supervised systems, there may be a wait to get started. You have to schedule an appointment, wait to be seen and evaluated, and then be treated.

Over-the-counter tooth whitening also involves the use of carbamide or hydrogen peroxide. It isn't always mentioned in the product instructions, but it's a good idea to get your teeth professionally cleaned, have all your cavities filled, and make sure your gums are healthy before using these products.

The primary drawback of the over-the-counter tooth whitening systems is that customers who use them may not be good candidates for tooth whitening, and there is no professional making sure everything works correctly. Many of the products do not list the concentration of the whitening agents or contain alternatives of varying strengths, so the consumer can not modulate the dosage to improve results or reduce sensitivity should it develop. In some cases, systems that use trays or strips may not adequately cover all the teeth, and less than desired results or irritation to the gums could occur.

Most studies confirm that tooth whitening is safe and effective. Whitening gels that contain 10 percent carbamide peroxide (equivalent to 3.6 percent hydrogen peroxide) have not been shown to cause any damage to the enamel of the tooth. Higher concentrations of carbamide and hydrogen peroxide available from the dentist may weaken the enamel, but most of these formulas also contain fluoride offsetting this potential side-effect. People who use higher concentrations of whitening agents can also receive prescription fluoride gels from their dentist to help further protect their teeth.

If tooth sensitivity or gum irritation occur, it is best to start using the whitening product less frequently -- say, every other day instead of every day -- and reduce the amount of time spent whitening. Prescription fluoride is also used to treat sensitivity sometimes associated with tooth whitening. Irritation of the gums can occur from either the in-office, at-home or over-the-counter tooth whitening systems. Gum irritation is usually mild and reversible, but can be treated with over-the-counter products such as Orajel.

Some dentists believe that they are losing patients and revenue because large companies are taking tooth whitening procedures away from them. It was the same argument the movie industry had against the VCR and Pay-Per-View. Guess what happened? People actually went out to the movies even more after these technological advances were introduced.

When Tiger Woods was winning tournament after tournament in 2000, some questioned whether it was good for golf to have such a dominant player. Again, we see that Tiger's presence has greatly increased interest in golf, bringing in droves of new fans.

Likewise, companies that market their over-the-counter tooth whitening products have actually helped dentists and consumers because they generate interest and enthusiasm about tooth whitening and cosmetic dentistry. In fact, the insert provided in Crest Whitestrips actually suggests talking to your dentist or dental hygienist about other cosmetic dental options and briefly describes those procedures.

For more information about teeth whitening and other dental issues, check out the links on the next page.

Dr. Jerry Gordon is a general dentist practicing in Bensalem, PA, a few miles outside of Philadelphia. He completed his undergraduate studies at Rutgers University in New Brunswick, NJ, majoring in biological sciences. Dr. Gordon was an academic scholarship student at the University of Medicine and Dentistry in NJ, and completed a general practice residency at Mount Sinai Medical Center in NY.