by John Fuller
Prev NEXT
8 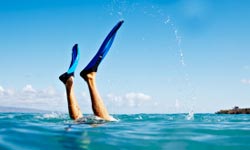 Although Franklin was a bit soft around the middle in his later years, in his youth he was a strapping, broad-shouldered specimen of a man. Well, at least that's what he claims in his autobiography.

Either way, Franklin credited his physique to being a vigorous swimmer. When he was posted to London in the 1750s, he was known to take daily dips in the Thames. When he was an 11-year-old in Boston, Franklin's first invention was a pair of oval planks with holes through their centres. Grasping the two planks with his hands, Franklin used the "fins" to give him a bit of extra thrust underwater.

The fins did allow the young Franklin to swim faster, but he soon ditched them after he noted that "they fatigued the wrists." He also strapped boards to his feet like sandals, but also gave them up after finding them awkward and clunky. In his later years, Franklin would leave his inventions for dry land, preferring to splash around without so much as a swimsuit.

In the days before heated pools and shark nets, swimming in colonial America was largely the domain of shipwrecked sailors and skinny-dipping children. Franklin's early advocacy for the sport has since earned him recognition in the International Swimming Hall of Fame and the United States Swim Schools Association Hall of Fame.