by John Zavisa
NEXT PAGE 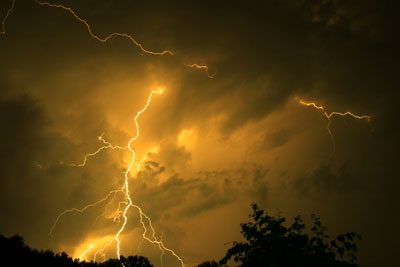 Flashes of lightning against clouds create an otherworldly effect. What is the science behind this beautiful -- but dangerous -- natural phenomenon? See more lightning pictures.
© Photographer: Soldeandalucia | Agency: Dreamstime.com

Lightning is one of the most beautiful displays in nature. It is also one of the most deadly natural phenomena known to man. With bolt temperatures hotter than the surface of the sun and shockwaves beaming out in all directions, lightning is a lesson in physical science and humility.

­Beyond its powerful beauty, lightning presents science with one of its greatest local mysteries: How does it work? It is common knowledge that lightning is generated in electrically charged storm systems, but the method of cloud charging still remains elusive. In this article, we will look at lightning from the inside out so that you can understand this phenomenon.

Evaporation is the process by which a liquid absorbs heat and changes to a vapor. A good example is a puddle of water after a rainfall. Why does the puddle dry up? The water in the puddle absorbs heat from the sun and the environment and escapes as a vapor. "Escape" is a good term to use when discussing evaporation. When the liquid is subjected to heat, its molecules move around faster. Some of the molecules may move quickly enough to break away from the surface of the liquid and carry heat away in the form of a vapor or gas. Once free from the constraints of the liquid, the vapor begins to rise into the atmosphere.

Condensation is the process by which a vapor or gas loses heat and turns into a liquid. Whenever heat is transferred, it moves from a higher temperature to a lower temperature. A refrigerator uses this concept to cool your food and drinks. It provides a low-temperature environment that absorbs the heat from your beverages and foodstuffs and carries that heat away in what is known as the refrigeration cycle. In this respect, the atmosphere acts like a huge refrigerator to gas and vapors. As the vapors or gases rise, the temperatures in the surrounding air drop lower and lower. Soon, the vapor, which has carried heat away from its "mother" liquid, begins to lose heat to the atmosphere. As it rises to higher altitudes and lower temperatures, eventually enough heat is lost to cause the vapor to condense and return to a liquid state.­

Let's now apply these two concepts to the water cycle.

Water or moisture on the earth absorbs heat from the sun and the surroundings. When enough heat has been absorbed, some of the liquid's molecules may have enough energy to escape from the liquid and begin to rise into the atmosphere as a vapor. As the vapor rises higher and higher, the temperature of the surrounding air becomes lower and lower. Eventually, the vapor loses enough heat to the surrounding air to allow it to turn back into a liquid. Earth's gravitational pull then causes the liquid to "fall" back down to the earth, thereby completing the cycle. It should be noted that if the temperatures in the surrounding air are low enough, the vapor can condense and then freeze into snow or sleet. Once again, gravity will claim the frozen forms and they will return to the earth.

In the next section, we'll see what causes electrical storms.