by John Fuller
Prev NEXT
2 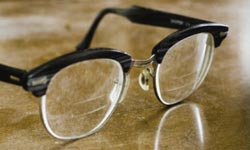 As he reached old age, Ben Franklin found himself becoming both near- and far-sighted. Outdoors, he needed a set of long distance lenses to see where he was going, but when he examined something close-up, he would need to swap out his outdoor glasses for a pair with different lenses. It quickly became a frustrating ritual, so Franklin simply cut the two glasses in half and joined them together in one frame.

With the new glasses, Franklin could see long distances by peering through the lens at the top of the glasses. To read, he would simply peer through the bottom of the lens. Amazingly, both far-sighted and near-sighted glasses had been around for centuries before Franklin's birth, but nobody had thought to join them together.

Aside from a few improvements, Franklin's original bifocal design has remained unchanged until modern times. In 2006, however, a team of Arizona researchers announced they had designed eyeglasses with lenses that could switch from far-sighted to near-sighted with the push of a button [source: National Academy of Sciences].