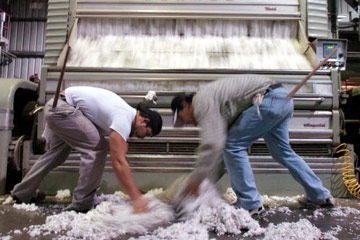 Two employees of the Holmes Gin Company collect some cotton that overflowed from the gin machine. Whitney's cotton gin is only one of his inventions that reshaped American industry.
Daniel Pepper/Getty Images

We sometimes fault machines for taking people's jobs, but some actually create them. Technology can boost productivity, which increases the demand for labor. It can also streamline complex tasks, opening the door for less skilled workers. American inventor Eli Whitney devised innovations that did both. Through his inventions, he transformed America's antebellum North and South, inadvertently setting them on a road toward conflict while helping America become more prosperous.

Whitney's most famous invention, the modern "saw" cotton gin was patented in 1794. The word "gin" is short for "engine," and it revolutionized cotton production in the South by automating its processing. His device consisted of a set of wheels on an axle attached to a crank. Each wheel sported metal hooks, akin to circular saw blades. As the blades turned, the metal hooks caught bits of cotton, pulling them through a screen that kept out seeds and hulls. A wire brush periodically swept the cotton off the blade as it came around, preventing the machine from jamming.

The cotton gin was especially useful to inland cotton farmers, who could only cultivate "green seed" cotton. This cotton was so labor-intensive that it required 10 arduous hours of hand labor to produce a single unit of useful "lint cotton." One Whitney cotton gin could do the day's work of several men in an hour.

Although it was a laborsaving device, the cotton gin strengthened slavery. The southern states bought more slaves to meet the ensuing productivity boost. Cotton was once a crop too labor-intensive for any but the largest plantations to produce. But the cotton gin helped it spread throughout the South. Raw cotton yield doubled each decade after 1800 until America supplied three-quarters of the world's cotton by the middle of the century.

Ironically, although the American South became a global cotton powerhouse because of the cotton gin, Whitney went broke fighting more than 60 lawsuits to defend his patent against copies. He was so discouraged that he never tried to patent his inventions again. As he put it, "An invention can be so valuable as to be worthless to the inventor."

Desperate for money, and with the U.S. possibly facing a war with France, Whitney sought and won a contract from the War Department to produce 10,000 to 15,000 muskets in only two years. This was quite a feat for a man with no firearms manufacturing experience. Trying to meet his ambitious contract led to his other great inventions, which helped set the stage for the Industrial Revolution in America. Whitney's inventions made him one of the fathers of American mass production.

Our Fascination with Mass Production

Despite what some textbooks say, Eli Whitney didn't invent the idea of interchangeable parts (which he termed his "uniformity system"). He wasn't even the first to suggest using them in a more efficient process of musket production. Nevertheless, he deserves credit for showing that mass production was possible and for selling the idea to the U.S. government.

Whitney is also responsible for designing a highly effective milling process that made mass production work. Whitney's milling machine wasn't the first, and it probably wasn't actually built until after his death. However, when it was built, it was so successful that it remained in use for 150 years, making everything from clocks to agricultural and manufacturing tools.

Whitney's milling machine involved clamping metal to a workbench and fastening a pattern on top of it. A worker would then roll a sharp-toothed metal wheel along the pattern to cut out the part instead of chiseling it by hand. Prior to Whitney's contributions, gunsmiths made muskets by hand, with each part being custom-made for an individual weapon, which in turn took days to finish.

Eli Whitney's processes, inventions and ideas created jobs for people who lacked the extensive training and experience of artisans. They also helped the North establish a productive and world-renowned manufacturing base and transformed the South into an agricultural power. Although he died 35 years before the Civil War, Whitney unintentionally laid its groundwork by increasing the demand for slaves. He also helped fill the coffers of southern plantation owners and provide the North with the industrial output required for fighting a drawn-out conflict.

History shows that successful inventors are often successful fundraisers. Whitney proved himself by landing a War Department contract he was clearly unqualified to fill. He even obtained an unheard-of advance of $5,000 to boot (along with extensions as he repeatedly blew deadlines).

The government sought to advance America's manufacturing base, but much credit belongs to the inventor's ability to form a persuasive argument and stage a convincing show. He did this by describing his designs in familiar terms. Whitney even pioneered certain modern accounting methods to get out of hot water with his funding agency.

Why are rodents such popular test subjects?
How Caviar Works
10 Black Scientists You Should Know