Why did Thomas Edison electrocute an elephant? 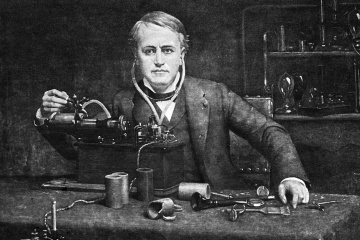 Edison’s link to the death of Topsy the elephant may not be entirely grounded in reality.
©ullstein bild/ Getty Images

The shortest possible answer is that he didn't, at least not directly. Thomas Edison, one of the giants of American history, is often credited (or more accurately, maligned) with using electricity to kill an elephant as part of a publicity stunt. Edison may have been a flawed man, but he probably had nothing to do with elephant murder, although a cursory glance at his background makes it easy to see why many people attribute this act of cruelty to him. The story begins — and ends — with darkness, both literal and figurative.

In the late 1880s, human civilization was still cloaked in darkness. Gas lamps were the primary source of light. Electricity was a novelty, light bulbs were a curiosity, and engineers battled to lay the groundwork for electricity distribution standards that would in many ways dictate the course of humankind.

There were two standards in play, including alternating current (AC) and direct current (DC). In what became known as "The War of the Currents," proponents for each standard touted their method as safer as and more efficient than the other. In one corner was Edison and the DC standard he advocated. In the other was George Westinghouse, who gambled on AC.

DC electrical currents work well at short range. In fact, if you look at the labels for many of your electronics you'll see that they are in fact DC. But DC loses its oomph over a distance, making it hard for power companies to transmit over miles of power lines. AC, on the other hand, can be sent through power lines much more efficiently and then converted to DC at the outlet for home use.

AC, then, was the inevitable winner in the war, but that didn't stop Edison from launching a propaganda campaign against Westinghouse and AC. Edison went so far as to round up stray animals and use AC to electrocute them in front of journalists in order to demonstrate that AC was more dangerous than DC.

Purportedly, as the War of the Currents came to an end, Edison opted for one last stand in hopes of swaying the public that his DC standard was safer and better than AC. His hope was that a widely reported spectacle might stop AC from spreading and instead make DC the current of the future.

As the story goes, Edison found his target in Topsy, a murderous circus elephant that was slated for death. But as is so often the case, that tale is not quite so simple.

Topsy's life ended a century ago, snuffed out in front of a carnival crowd that gathered for a spectacle that became a milestone for both technological progress and animal cruelty.

From Asia to America 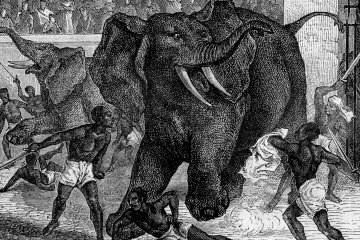 Elephants have been included in circuses dating back to Roman times, and many have suffered incredible abuse.
© Lebrecht/Lebrecht Music & Arts/Corbis

Topsy was just a baby when she was captured somewhere in Southeast Asia around 1875 and then shipped to the U.S. She was put to work for the Forepaugh Circus, which at the time was in competition with Barnum & Bailey to own the most impressive collection of elephants.

Topsy was passed through several owners and multiple trainers, most of whom used methods that by today's standards would be considered abusive. The animal's tail was famously crooked because of the beatings she endured. As the years went on, Topsy apparently became more and more short-tempered because of her maltreatment and she developed a reputation for aggression.

In 1902, a man named James Fielding Blount reportedly burned Topsy with the red-hot tip of a cigar. In a pain-fueled rage, she struck back, killing him. Yet her owners found her too valuable to part with, so they kept her as part of the show, letting her man-killing past become a part of her appeal.

Eventually she wound up at Coney Island's Luna Park, a brand-new amusement park in New York City. She was one of the biggest attractions and became an animal celebrity of sorts, if one with more than a little notoriety. At one point, her owners put her to work hauling building materials at the park, where numerous accounts bore witness to beatings and other cruelty from her human caretakers.

In one particularly ridiculous instance, a handler named Whitey Ault became intoxicated and rode her through the city streets, frightening citizens and police along the way. Although the incident was entirely Ault's fault, the fallout resulted in more negative publicity for an animal that already had a nasty reputation.

Topy's owners decided that it wasn't in their best interests to keep an elephant known for unpredictable behavior. After negotiating terms with the Society for the Prevention of Cruelty to Animals (SPCA), they arranged for a publicly staged killing of Topsy.

On Jan. 4, 1903, a team led the 28-year-old Topsy to a ring of 1,500 spectators and wound a noose around her neck. They fed her poisoned treats and then affixed two copper elements, one to her forefoot and other to a hind foot, ensuring that the AC electrical current would flow throughout her entire body. The electricians were, quite notably, from a company bearing Edison's name.

When the men finally flipped the power switch, more than 6,000 volts of electricity coursed through Topsy. She keeled over almost instantly. After 10 seconds, the technicians stopped the current and the noose around her neck was cinched until observers deemed her completely dead. 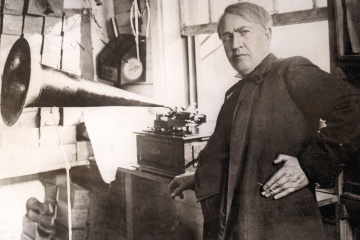 Even if Edison was somehow involved in Topsy’s electrocution, he gained nothing from it.
© Imagno/Getty Images

Some historical texts paint Topsy's execution as a battle in the War of the Currents, and that Edison's company was leveraging the stunt to show that AC power was more dangerous than DC. But a simple review of the timeline shows that the debate over AC versus DC had been settled more than 10 years prior to the elephant's death.

That means Edison had little to prove through (yet another) public animal electrocution. From all accounts, Edison wasn't present during Topsy's killing. Newspaper reports from the time do mention that electricians from an Edison company were involved in setting up the technical aspects of the execution, but because of various mergers and buyouts it's not clear that Edison himself was even a part of those companies.

Also, there was a film crew from Edison Manufacturing recording the event, and Thomas A. Edison is credited at the end of the clip — you can easily find it online if you have the stomach to watch it. But the same company created more than 1,000 films bearing Edison's name, and they often made these recordings without his input or direction, making it very possible that Edison had nothing at all to do with Topsy's unhappy ending.

Of course, Edison may have orchestrated the killing from afar. Perhaps he offered technical direction for the placement of the copper fittings and the setup of the AC system. Maybe he was harboring leftover resentment from the AC-versus-DC debacle and decided to take it out on an animal. We'll probably never know for sure.

Regardless, Edison gained little, if anything at all, from Topsy's death. AC remained the standard of choice for electricity transmission all over the world. And Edison later admitted that he wished he'd paid heed to AC at the very beginning of the electrical revolution so that he could've been on the side of the victors.

Edison's name is hardly tarnished by his defeat in the war of the currents. He is still regarded as an iconic figure in world history and virtually synonymous with the spread of incandescent light bulbs. And fortunately for his legacy, Edison is also spared direct association with the electrocution of a doomed elephant named Topsy.

Author's Note: Why did Thomas Edison electrocute an elephant?

Researching Topsy's plight was a sad ordeal for me, and it was an unpleasant reminder of how awful human nature can be. The happier side to the story is that in many places, animal cruelty laws are now much stricter and people who break those laws are widely scorned. It may be too late for the likes of Topsy, but at least we've made a bit of progress in our treatment of our fellow creatures.

Is it true that grilling meat can cause cancer?
How Yogurt Works
How Phytochemicals Work