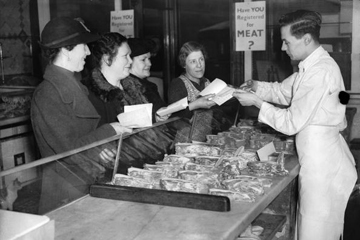 During World War II, Britons were given ration books. They were loaded with coupons for bread, cabbage and potatoes, the triumvirate in Elsie Widdowson's wartime diet plan.
Reg Speller/Hulton Archive/Getty Images

If Santorio Santorio established a proud tradition of self-sacrifice in the field of metabolic research, then perhaps his greatest heir was Dr. Elsie Widdowson. For much of her 60 years of study of nutrition and metabolism, the 20th century British researcher used herself as a willing test subject in her experiments.

In her early career, Widdowson and her long-time collaborator Dr. R.A. McNance combined their research on fruits, vegetables and meats to write "The Chemical Composition of Foods," a landmark book on nutrition still in use today. It was World War II, however, that led Widdowson and her colleague to self-experiment. Because the British government was rationing food, Widdowson decided to determine what healthy diet could be had from the meager and somewhat random assortments of foods that were most widely available to the average Briton during the war. Putting herself on starvation diets, Widdowson produced a diet founded on cabbage, potatoes and bread that could keep a person in good health and submitted it to the British government, which championed it [source: Martin]. To prove their diet, Widdowson and McNance showed it could sustain even the most brutal calorie-burning regimen. While half-starved, the two took to the mountains for grueling workouts, in one day burning 4,700 calories by walking 36 miles (58 kilometers) and climbing 7,000 feet (2.13 kilometers). Keep in mind that the average daily energy expenditure for a female is around 2,200 calories [source: Martin, Smith]. Their diet findings were used to help feed starved Holocaust survivors.

Widdowson also self-experimented with other aspects of diet, including determining salt intake and through self-injecting iron, she found that the mineral is regulated in the body through absorption, not excretion, a finding that forms the basis for treating anemia [source: MRC].