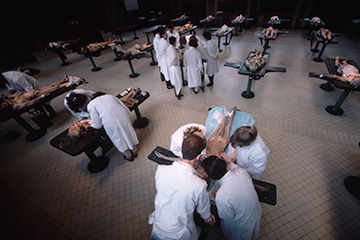 For some, the thought is decidedly unpalatable, if not a bit gruesome — donating your body to science. Who would want to do such a thing? Images of people slicing and dicing you every which way until you're unrecognizable aren't amusing. Nor is the thought of medical students or researchers possibly laughing over your body as they work. Other people, however, view anatomical donation as a noble endeavor — possibly the noblest there is. Let those students and scientists use every muscle, bone and fiber in your body, if it will better the lives of all of those who come after you. And who knows? Maybe your humble body will be the one to yield the clues that enable a cure for cancer.

Whatever your thoughts regarding donating your body to science, know this: there is a critical need for dead bodies [sources: Texas A&M Health Science Center, Maryland Dept. of Health and Mental Hygiene]. No truly accurate statistics exist, since there is no central regulatory organization tracking anatomical gifts, but experts estimate 10,000 to 15,000 bodies are donated annually to medical schools in the U.S., with additional donations going to private entities, corporations and government agencies [sources: Miller, Science Care]. A 2009 article penned by a Harvard Business School professor said the annual number of bodies donated in America to all groups was about 20,000. Lest you think these figures sound like a wealth of bodies, the Anatomical Gift Association of Illinois — just one group among hundreds — estimates it could use about 425 cadavers a year and had received that number only three times between 2005 and 2011 [source: Bushey].

Interested, but worried your religious beliefs will prevent a donation? The majority of religions actually support anatomical donations. Baptists, for example, view donating your body to science as an act of charity. Catholicism says organ and tissue donations are acts of love. Hinduism says donating your body isn't prohibited by religious law; the decision is up to you. All four branches of Judaism encourage such donations. Although Jehovah's Witnesses have rules against some blood transfusions, the religion says whole-body donations are OK, as long as blood is removed from the organs and tissue. Most Islamic scholars say organ donation is permitted but not whole body donation [source: Science Care].

Hospitals generally go out of their way to treat donated bodies with respect. For instance, at Kansas City University, medical students are told the names of the deceased and also how they died before the students use them as part of their coursework [source: Science Care]. And most facilities hold a yearly memorial service to honor the donors. Science Care, an organization that connects whole body donors with medical facilities, plants a tree in honor of each donor.

Before you make any rash decisions for or against body donation, read on to see how the process works.