Why do leaves change color and turn red? 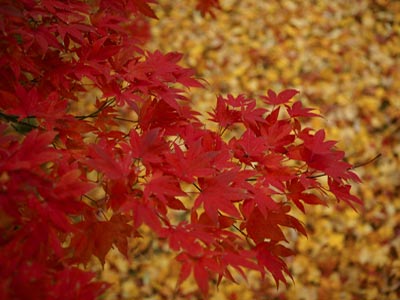 ­Enthusiastic snowball fights in winter or lazy summer days at the beach notwithstanding, autumn might be the most beloved season of them all. Every year, people watch in awe as the trees begin their magical transformation from green powerhouses to veritable smorgasbords of color. In the northeastern United States, millions of "leaf peepers" come from all over the world to observe nature's fine art gallery [source: Haberman].

New England doesn't have a monopoly on the color-changing business, and those leaf peepers are far from alone in their wonderment. From Europe to Alaska, people revel in nature's annual opportunity to mix up the palette. Pity those who live in areas that get cheated out of these glorious displays of color; the lucky ones are left debating which hue they most favor -- brilliant yellows, fiery oranges or vibrant reds?

If you're partial to crimson, you might wonder why nature seems to go overboard with the red some years and forget it entirely during others. Native American lore explained the appearance­ of the magnificent colors as coming from above: After hunters killed the Great Bear in the sky, the story goes, its blood splashed down and turned the leaves red. And the yellow leaves? They get their tint from the bear's fat splashing out of the pot that it was being cooked in.

If this explanation doesn't quite satisfy your puzzlement of why leaves change color, scientists have one of their own. Instead of hunters, bears and lard, theirs involves photosynthesis, pigments and sunlight. To fully understand the chemistry behind the color show, we'll need to revisit first-grade science class.