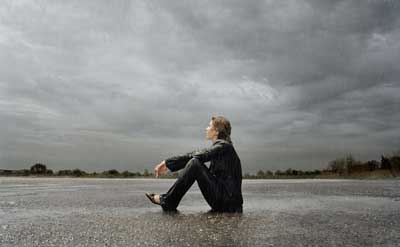 We experience weather every day, but to properly understand it, we must first remove ourselves from the picture and look at weather from a global viewpoint. See more storm pictures.
Mathhias Clamer/Stone/Getty Images

When it comes to discussing the weather, most people can hold up their end of the conversation. After all, who doesn't have an anecdote about how a rainy day disrupted their plans? Weather is all around us, affecting every aspect of our lives. It's no wonder discussion of it fills our awkward pauses and doomed first dates.

This view of the weather, as something that happens around our lives -- is the first concept you have to abandon to gain a clear understanding of how Earth's atmosphere works. Forget that cloudy days make you sad or that you hate shoveling snow. Even put aside the idea of weather as something that happens to a city or region. The weather is simply the state of the atmosphere, the gaseous layer that serves as the outermost barrier between Earth and the rest of the universe.

­While water covers 71 percent of Earths' surface, the atmosphere envelopes all of it. But this layer of gases doesn't just sit there, it's subject to influence from a host of terrestrial and extraterrestrial forces. Think of the atmosphere as a lucky man or woman who has just won the lottery. Suddenly, everyone seems to have a few suggestions on how he or she should spend his or her time and mo­ney. Uncle Joe says one thing, Aunt Clara another. Before you know it, everyone seems to have some sort of input into the winner's daily life.

For Earth's atmosphere, gravity, sunlight, oceans and topography all dictate certain cycles of air movement -- some very localized, others concerning vast portions of the planet. In addition, a number of these various cycles affect each other, spinning off new cycles and brewing clouds, precipitation and an unending torrent of storms. All of these various atmospheric responses are what we know a­s the weather.

­With all of these various influences, Earth's atmosphere is quite an intricate system. No wonder it's so hard to predict the weather. In this article, we'll unravel that intricate system, starting from space with the big picture and moving steadily back down to the level you experience every day.