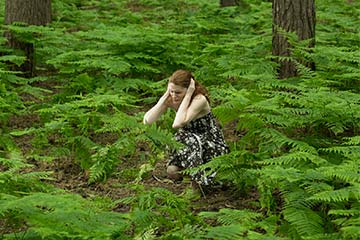 The smell we associate with freshly cut grass is actually a chemical distress call. What if we could hear it?
Michael Blann/iStock/Thinkstock

Few moments evoke a sense of summer like catching a whiff of freshly cut grass. For many people, it's a pleasant sign that warmer temperatures are here to stay. For the grass, however, this scent signals an entirely different story.

The smell we associate with freshly cut grass is actually a chemical distress call, one used by plants to beg nearby critters to save them from attack (usually it's an affront by insects, but in this case, it's lawnmower blades). After all, when danger strikes -- whether it's landscaping equipment or a hungry caterpillar -- plants can't lift their roots and run. They must fight where they stand.

To protect themselves, plants employ a volley of molecular responses. These chemical communications can be used to poison an enemy, alert surrounding plants to potential dangers or attract helpful insects to perform needed services [source: Krulwich]. Sometimes, a plant's molecular defense plays double-duty. For example, plants that produce caffeine use the chemical as self-defense, but it also gives bees a caffeine buzz. The caffeinated bees treat the plant like it's the corner coffee shop, returning again and again and leaving their pollination services as payment.

Clearly, plants can communicate. But does that mean they can feel pain? It's a troubling scenario for salad lovers squeamish at the thought of eating foods with feelings, and for them the answer may not be that appetizing.

According to researchers at the Institute for Applied Physics at the University of Bonn in Germany, plants release gases that are the equivalent of crying out in pain. Using a laser-powered microphone, researchers have picked up sound waves produced by plants releasing gases when cut or injured. Although not audible to the human ear, the secret voices of plants have revealed that cucumbers scream when they are sick, and flowers whine when their leaves are cut [source: Deutsche Welle].

There's also evidence that plants can hear themselves being eaten. Researchers at the University of Missouri-Columbia found that plants understand and respond to chewing sounds made by caterpillars that are dining on them. As soon as the plants hear the noises, they respond with several defense mechanisms [source: Feinberg].

For some researchers, evidence of these complex communication systems -- emitting noises via gas when in distress -- signals that plants feel pain. Others argue that there cannot be pain without a brain to register the feeling. Still more scientists surmise that plants can exhibit intelligent behavior without possessing a brain or conscious awareness [source: Pollan].

As they grow, plants can alter their trajectories to avoid obstacles or reach for support with their tendrils. This activity stems from a complex biological network distributed through the plants' roots, leaves and stems. This network helps plants propagate, grow and survive. Trees in a forest, for instance, can warn their relatives of insect attacks.

One scientist injected fir trees with radioactive carbon isotopes and saw that within a few days the carbon had been sent from tree to tree until every tree in the 30-meter-square area was connected. The scientist learned that the mature trees "communicated" to the network to share nutrients through their root systems to feed nearby seedlings until they were tall enough to take in light for themselves [source: Pollan].