by Jessika Toothman
Pollen grains take an endless array of fascinating shapes with all manner of textures and features. Dan Kitwood/Getty

Plants evolved pollen as a reproductive means more than 375 million years ago, and since then, they haven't looked back [source: Dunn]. A large portion of the plant life that's spread far and wide across the planet today displays this evolutionary ingenuity. The main reason pollen -- and by extension the process of pollination -- is so important, is because it means plants don't have to rely on water to transport the biological components necessary for fertilization. Plants that bear pollen also tend to offer protection to their offspring after fertilization in the form of hard seeds -- and in some cases, those seeds are even nestled inside fleshy fruits.

Pollen grains are, in essence, plant sperm. Or perhaps more technically, sperm sedans. Inside, they contain the male portion of DNA needed for plant reproduction. There's great variation when it comes to the size of pollen grains, and there's no correlation between the size of the plant and the size of the pollen it produces. Large plants might generate some of the tiniest grains of pollen, while diminutive plants may yield pollen that puts those to shame. Pollen grains may not look like much; to the naked eye, they often look like dusty specks, but upon closer inspection, they take an endless array of fascinating shapes with all manner of textures and features.

Whether conical, spherical, cylindrical or some other fantastical shape, many grains of pollen resemble something else, be it coral, succulent, seashell or sea anemone. Some grains are dotted with little spikes; others have weblike surfaces. Still more appear enshrined in ropey tangles, while others sport delicate dimples or have ribs that resemble the stripes on a watermelon.

Many of these unique adaptations are to help the pollen get where it needs to go -- namely, its own species' female counterpart. Surface features help grains cling to different modes of transportation, such as bird feathers, bee legs or animal fur. Or they help pollen sail through the air on appendages that resemble airplane wings or hot air balloons. Some of these features even help a pollen grain perform successfully when it reaches its destination. We'll discuss what happens when that happy event occurs on the next page.

The Process of Pollination 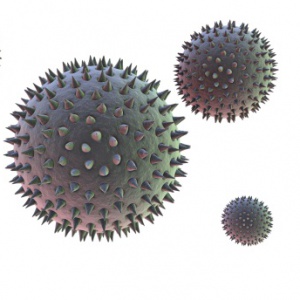 The surface textures on grains of pollen can help them affix to mobile pollinators. Similarly, plants are often sticky or feathery at their respective receiving parts, to help make sure they can ensnare pollen that passes their way.
iStockphoto/Thinkstock

In most pollen-producing plants, a grain of pollen successfully completes its journey when it travels from the male portion of a plant specimen to the corresponding female portion. Ideally, it finds its way to an entirely different plant to increase outcrossing borne from crosspollination. That's not always a hard and fast requirement, however, although it's important to note that many plant species have ways to prevent a particular plant from pollinating itself. Some are even genetically self-incompatible.

Once a grain of pollen reaches the plant's female portion, in most cases an ovule, one of the lucky sperm (typically out of two) lodged within the pollen will fertilize the egg cell inside. After fertilization occurs, the ovule will gradually develop into a seed, and that seed will transport its embryonic plant to a new home.

Plants that follow this basic reproductive path are known as gymnosperms. Trees that have pinecones and similar reproductive structures, as is the case with most conifers, are examples of gymnosperms. Let's take a closer look at conifers, the most numerous and widespread gymnosperms on Earth today, and pines in particular, since they're some of the most familiar species.

Pinecones generally come in male and female varieties, and they can be all sorts of shapes, textures and sizes, depending on the species. One makes the pollen, and the other receives it. Once a pollen grain arrives at an ovule -- usually adhering with the help of a sticky substance produced by the female pinecone -- it absorbs water, germinates and starts slowly growing a pollen tube in order to place the newly generated sperm inside. Fertilization occurs, and a seed eventually forms. The length of time it takes for the overall process to complete itself varies greatly; in many pine species, the pollination process takes more than a year from start to finish. Once it's finished, the seed is liberated from the cone, to travel on its way.

But although the development of the pollination process was revolutionary, it still had some kinks that could be worked out. On the next page, we'll take a look at the plants who whipped out the evolutionary iron and made the method that much more reliable.

Many people suffer from allergic rhinitis, and pollen is a big contributor. Different plant species produce different pollens, and those different pollens are composed of different buffets of proteins. Some of those proteins cause allergy sufferers' immune systems to go into overdrive. 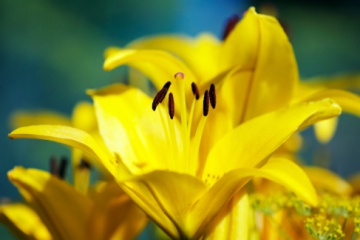 In this flower, the stamen ring the carpel, of which the stigma and style portions are both visible.
iStockphoto/Thinkstock

Some plants -- the angiosperms -- evolved to take the pollination process a step further. These are the flowering plants, and not only do they produce seeds, they also flower and produce protective fruits. These reproductive safety nets are also better at luring mobile organisms into assisting them successfully complete their life cycles; in fact, many evolved in tandem with the creatures who pilot the pollination process. In terms of species, angiosperms are the most prolific type; many species of trees and shrubs, along with all manner of fruits, vegetables, grains, cacti and wildflowers are considered angiosperms [source: Raven].

So let's look at how this works in your typical flower and dig down a little deeper into the development of pollen in general. Pollen grains are created through the process of meiosis, during which cells divide and grow in number. The grains of pollen are often located in pollen sacs on the ends of the stamen (the male parts of the flower), which typically surround the carpel (the female parts of the flower). The stamen generally come in two sections: the two-lobed anther, which house the pollen sacks, and the filament, the stalk on which the anther perch. Each grain gradually develops a tough outer wall to shelter it during its journey.

Once it's deposited at its destination, grains of pollen settle on a flower's stigma -- the entrance to the ovary. Like with the gymnosperms, germination and pollen-tube formation follow fertilization, but this time both sperm are used. While one fertilizes the egg cell, the other is tasked with fertilizing another cell that will develop into the endosperm, which is what growing plant embryos consume before and during the sprouting process.

Different flowers grow in different configurations, and while many, in fact the majority of angiosperms, carry both stamen and carpal components, some do not. For those species, male and female reproductive parts can be found on different flowers of the same plant -- similar to how many gymnosperms' pinecones are commonly configured. Or, in some cases, each particular plant specimen may feature only one or the other, varying the process slightly.

The Transporters of Pollen

Pollen can be carried by wind, rafted by water or shuttled around by any manner of creatures, be they bees, beetles, birds or bats, and deposited on the female reproductive part of another flower. That might sound pretty hit or miss, and it is, which is why plants -- particularly gymnosperms -- produce lots of pollen.

In order for plants to successfully spread their pollen, many coevolved with other creatures to get the job done more frequently and more efficiently. This happened a number of ways. With flowering plants, for example, those with the tastiest pollen were more likely to attract pollinators, so they were the ones that had the best chance of propagating their species. Flowering plants also leverage shape, color and scent to bring in more customers, sometimes in ways that might seem surprising. Many beetle species are attracted to flowers that produce scents we would consider highly unappealing. Some of these plants, among them the common household philodendron, attract beetles by heating up through a chemical reaction. It causes them to produce an odor reminiscent of decomposing organic matter, which the beetles are naturally drawn to. One Sumatran plant, known as the devil's tongue, smells so foul it has reportedly made people pass out. It's pollinator? A species of carrion beetle.

Bright colorful flowers are most likely to attract diurnal creatures, while white or light yellow ones are most likely to be spotted by nocturnal animals. There's also the production of nectar. Many proficient pollinators, such as bees, bats and hummingbirds thrive on nectar, so having nectar cups suited for the pollinator's mouthparts was another important specialization to develop. Lastly, the positioning of plants' sexual parts evolved, too. Those specimens whose arrangement best catered to a potential pollinator's feeding habits were most successful. So stamen that were most likely to be brushed against by a pollinator -- and therefore more likely to be brushed off and carried away -- were the most ideally positioned for evolutionary perseverance.

Bees provide a great example of co-evolution in action and they're incredibly important pollinators. They consume nectar and pollen, collecting both while they forage. Flowers have evolved into specific color, fragrance and shape combinations that make them attractive and accessible to bees (and often unappealing or inaccessible to their competitors). Bees have paid back such flowers by evolving specific body parts that make them more efficient at collecting -- and inadvertently passing on certain portions of -- pollen as they make their rounds. 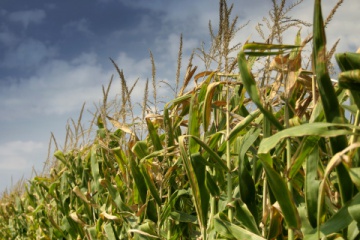 Bees, along with other creatures, are important and highly adapted pollinators.
iStockphoto/Thinkstock

Plants, pollen and pollinators are obviously of great importance to humans. People surely passed on knowledge of plants throughout our species' long evolution, but some 11,000 years ago, we drastically changed the game [source: Starr]. That's around the time people began domesticating crop plants -- selecting favorite specimens from wild breeds and cultivating them for certain desirable attributes like high yield, pest resistance or heat tolerance. Fast forward to today, and our crop production methods have again leapt forward dramatically from those early beginnings. Now many crops are genetically modified organisms, or GMOs, and our artificial tampering has left lots of people wondering what impact it will have on naturally evolved organisms.

Scientists study whether and under what circumstances GMO crops have the potential to interbreed with conventional crops, as well as related species. One study conducted in Africa, an area where GMOs could have a considerable impact, determined bees there venture close to 4 miles (3 kilometers) away from the nest while foraging [source: Science Daily]. Such range could allow the trangenes of introduced GMO crops to infiltrate wild species. In order to control instances of crosspollination, international bodies such as the European Coexistence Bureau advocate certain isolation measures. These include spatial and temporal steps; in other words, planting crops at certain distances from plants that might be cross-pollinated, as well as timing such plantings so the species flower at different times of the year.

Pollen is also useful stuff to study for other reasons. By taking core samples, scientists who specialize in fields of palynology -- the study of pollens, spores and similar microscopic plant life -- can get a good idea as to what plants were prevalent during different eras of the Earth's history. For example, pollen and other palynomorphs can help determine when agricultural cultivation starts or stops in a certain area, when a stretch of land was wooded or meadowed, or when changes in climate occurred.

On the next page, learn lots more about pollen -- and what to do when it starts you sneezing.

Can plants think?
Rare Groundcherry Could Soon Be Everywhere, Thanks to Gene Editing
How Cranberry Bogs Work