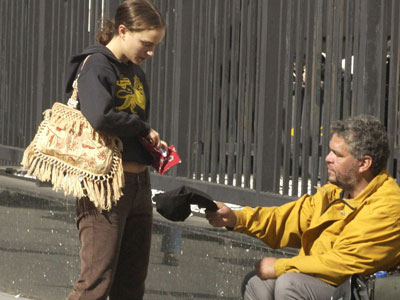 Actress Natalie Portman gives money to a person on the street in 2003 in New York City.
Getty Images

Since you can't spend your lottery winnings or Christmas bonus on happiness, you may need a few pointers on what you should spend it on. If it's happiness you're after, you might do best to simply give it away.

In an experiment that would make Mother Theresa proud, a group of researchers gave students $5 or $20 to spend. Half of the students were told to spend the money on something for themselves and the other half to spend it on someone else. Despite the students' belief that they'd be happier if they were assigned to the "spend it on yourself group," when polled afterwards the students who used the money to help someone else actually reported higher levels of happiness, regardless of how much money they were given in the first place [source: Goldberg].

In a similar study involving work bonuses, employees were able to increase their happiness level by an entire point on a 5-point scale when they spent one-third of their bonuses on others. This was true regardless of whether that bonus was $3,000 or $8,000, indicating that when it comes to happiness, it's not the amount of money you earn but how you spend it that really matters [source: Bryner].

While the exact reason for this selfless spending euphoria isn't certain, it's possible that it generates feelings of gratitude, makes a person feel better about themselves or simply involves more social interaction, all of which are linked to happiness.

On a similar note, people also tend to report higher levels of satisfaction after spending money on experiences rather than things. For instance, purchasing tickets to a movie with a group of friends is likely to make you feel better than impulsively buying a T-shirt at the mall. While the positive feelings associated with the movie outing can be relived again and again, the T-shirt's novelty will probably wear off after a couple of spins in the wash.

Basically what all of this data about money and happiness tells us is that it's called cold hard cash for a reason. You can buy all of the flashy cars, Armani suits and diamond rings you want, but at the end of the day, you're going to be the same person -- just with more stuff. Without the things that research tells us are the real sources of happiness -- social connections, challenging work, good health -- you're not going to get very far in your new set of wheels.