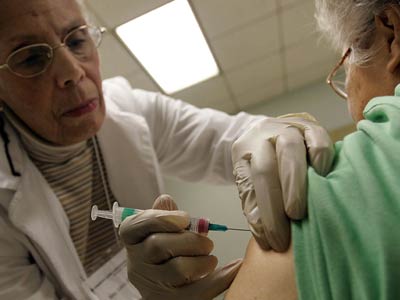 Another way to prevent the flu is by getting a vaccine at the beginning of each flu season (October or Nov­ember). The earlier you get vaccinated the better, because it takes about two weeks for the vaccine to take its full protective effect. Children under the age of 9 who have never had a flu shot especially need to get an early start, because they will need to have two vaccinations administered about one month apart.

The flu vaccine comes in two forms: a shot and a nasal spray, and works by triggering your body's immune system response. When you get a flu vaccine, your body recognizes the flu virus as a foreign invader and produces antibodies to it. The next time your body encounters the flu virus, it will remember that it is a hostile invader and quickly launch an immune attack to kill off the virus.

But if your body remembers the virus, why do you need to get a flu shot every year? First, because flu strains differ from year to year; and second, because immunity declines over time.

The shot, which is normally given in the arm, is made up of three different viruses. The three strains are chosen by scientists working in laboratories around the world. They collect flu viruses and predict which strains will be most prevalent in the coming flu season. The viruses in the shot are inactivated, or dead, which means that they can't actually give you the flu.

The nasal-spray flu vaccine is often referred to as LAIV (Live Attenuated Influenza Vaccine). Unlike the flu shot, it uses a live but weakened version of the virus. Like the shot, it contains three different flu strains. When the LAIV is sprayed into the nose, it works much like the injected form of the vaccine, stimulating the immune system to develop antibodies against the virus.

How effective is the nasal vaccine? One large study found that it reduced the incidence of flu in young children (age 1 to 7) by 92 percent. The study didn't test the effectiveness of the flu spray on adults. Because it is a live vaccine, LAIV is only recommended for healthy people between the ages of 5 and 49.

In 2004, the British company Chiron announced that none of its flu vaccine (Fluvirin), about 46 million doses, would be available for the 2004-05 flu season. Without Chiron's vaccines, the nation's flu vaccine supply was cut in half. By early October 2004, 30 million doses of the 54 million still available flu vaccines had already been given out. Lines for flu shots snaked around the block outside of supermarkets and health-department offices. To conserve the remaining vaccines for those who needed it most, the CDC asked that only people in high-risk groups get vaccinated.