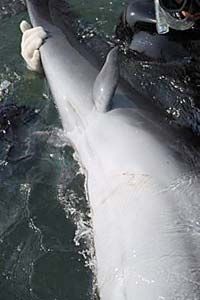 In 2006, a bottlenose dolphin with palm-sized fins near its tail was found in Japan. The extra set of fins could be the remains of hind legs.
Taiji Whale Museum/Getty Images

Our mammal friend the whale gives us the perfect example of an atavism, a trait from a distant evolutionary ancestor that has reappeared in a modern-day organism. Millions and millions of years ago, the ancestors of whales walked on land. Over time, they went from land dwellers to sea creatures, possibly in search of food, and lost the legs and other traits they wouldn't need in the ocean. To understand how this happened, let's talk a little bit about how evolution works.

The theory of evolution posits that DNA can change. These changes in an organism's DNA can be good, bad or neutral. Over time, these changes, or mutations, lead to new species. Natural selection is part of evolution. The organisms with good mutations -- beneficial changes -- thrive and reproduce, while those with bad mutations die out. Natural selection chooses the pick of the litter every time. (For a more in-depth explanation, see How Evolution Works). The whales that took to the sea no longer benefited from legs, so their DNA mutated to get rid of this trait. The whale ancestors whose bodies adapted best to their environment thrived and passed these adaptations down to their offspring.

Dollo's law states that evolution isn't reversible, and that things that have been lost during the course of evolution don't reappear. Once it's gone, it's gone -- sayonara, whale legs. Later scientists modified the law to say that the probability of this happening is low. But what if Dollo's law is wrong? A whale with legs is just one example of an atavism - they crop up more frequently than you would suppose. Maybe evolution works differently from what we had supposed. Maybe understanding atavisms will help us unlock some of the mysteries of evolution, a theory that still has some holes.

Atavisms have been misunderstood for a long time, partly because of a man named Cesare Lombroso, a social Darwinist who believed that criminals are throwbacks to a primitive human ancestor. He declared that criminals are born criminals, and you can recognize them by their physiology. According to Lombroso, certain facial characteristics denote a criminal. (Interestingly, Lombroso also thought that criminals must have a higher pain threshold than the average citizen because many of them have tattoos from prison. His (faulty) logic was that since criminals have tattoos, and tattoos are painful, then they must have a higher tolerance for pain.) Lombroso's erroneous ideas persisted in some fashion despite evidence that his conclusions weren't scientific at all. People still sometimes associate atavisms with distasteful stereotypes, even though that isn't what the word means.

So what does it mean? Next, we'll look at traits that people mistakenly think are atavisms and how they might happen.

Louis Bolk suggested that all mammals have the ability to express the traits we call atavisms, but humans just don't. This wouldn't make atavisms evolutionary throwbacks, just a genetic fluke.

What is an Atavism? 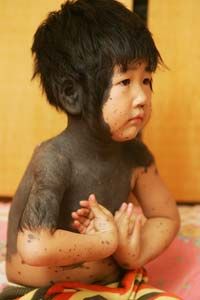 Four-year-old Jiaxue, of China, was born with hairy black moles covering parts of her back, chest, neck and face. The media reported her condition as an atavism.
Photo by China Photos/Getty Images

Perhaps you've heard of the world's hairiest man. The media loves to show his picture. Newspapers call conditions like this and others atavisms. Is the world's hairiest man really a throwback to our simian ancestors? Not quite. Ape faces are clear of hair, as Michael Le Page notes in his New Scientist article on atavisms. So hypertrichosis, a condition in which excessive amounts of hair cover the body, isn't an atavism -- unless our ancestors were werewolves. If it is an avatism, it's not from the animals we point to when we talk about evolution, like chimps.

What's the difference between atavisms and vestigial structures? They're actually pretty close. Vestigial structures are body parts that survive as degenerate, imperfect versions of what they should be. Think of the ostrich: It has wings, but it can't fly. Ostriches use their wings for other purposes, like balance, but their wings can't function as wings. Their wings are vestigial -- they're used for a purpose, but not the purpose for which they may have originally served.

Atavisms are traits of distant ancestors that reappear in the modern day. In order for the trait to be an atavism, an organism's parents can't have the trait, and neither can recent ancestors. The atavism you've probably heard of most often? The human tail. It's not just a gag to pull in a Farrelly brothers movie -- it really happens. There are two kinds of human tails, however: the pseudo-tail and the much rarer, true human tail. The pseudo-tail doesn't have any bones or cartilage -- it's skin and fat. But the true human tail has nerves and muscles and sometimes even cartilage or vertebrae, although there seems to be some scientific debate about this last point. All vertebrates have the ability to make a tail, and guess what? Humans are vertebrates. Way back when, maybe we all had tails, and they provided some important function for us, perhaps to help us balance.Some other traits that could possibly be human atavisms are webbed fingers and toes, extra fingers and toes, hiccups and large canines. Until we know more about the genetics of these traits, we can only speculate [source: LePage]

So how do these traits crop up? One idea is that instead of genes being lost during evolution, they're merely silent - they're still there, they're just not doing anything. But maybe these genes can be turned back on. Studies have shown species that lose and regain wings millions of years afterward. Are these species just evolving once again? Or did a silent gene labeled "grow wings" suddenly switch back on?

Scientists aren't sure how atavisms work -- not yet. They point to embryos to help decipher the answer. Embryos develop characteristics in the womb that later disappear. Whale embryos do grow buds where their legs would be, but they lose them as they develop. When you were a fetus, you had a little bud where a tail would be, but it disappeared before you were born. But on rare occasions, they don't disappear, and a baby whale is born with leg-like appendages or a human baby is born with a tail, which is usually amputated.

So why do atavisms happen? What place do they have in evolution? We don't know the answer. Often when people think of genetic information, they think about cloning, designer children and other controversial topics. But as scientists delve more deeply into our genetic information, this could be one of the most exciting areas of research -- finally figuring out where we came from and how we got to where we are.

What Does Atavism Really Mean?

To further muddle things, people also use the word "atavistic" to refer to architecture and psychological traits, among other things. A man's aggression might be described as atavistic because it supposedly harks back to the ancient days of being a barbarian hunter.