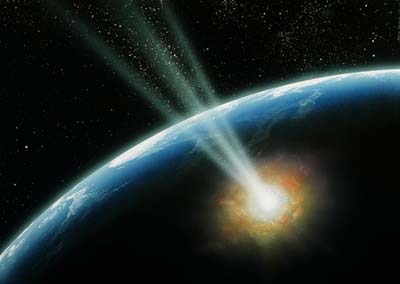 While asteroid collisions have probably been behind at least one major mass extinction, most extinctions happen on a much smaller scale.
Kauko Helavuo/The Image Bank/Getty Images

It's easy to think of extinction as a big, dramatic event, the product of an asteroid collision or the invasion of new, aggressive species. But extinctions happen even without the aid of natural disasters or widespread slaughter. Researchers estimate that between 1 and 4 billion species have lived on Earth during its history. All but about 50 million of those are gone today. Less than a third of those billions of extinct life forms died out during mass extinctions [source: Newman].

You'll notice that these are all averages and approximations. That isn't just because they involve large numbers and long time spans. These numbers are approximate because of several unavoidable difficulties that are part of studying extinction:

Because of all this, a lot of the study of extinction can seem like it has more to do with math than with real, living beings. Researchers use the number of known fossils to estimate the number of species that have ever existed. They use estimates called confidence intervals to analyze how likely it is that a particular species became extinct at a particular time. And they use equations and algorithms to try to make up for the holes in the available data and to make accurate predictions of how, when and why species have become extinct.

Researchers can also apply mathematical analysis to the plants, animals and microscopic organisms that are alive today. For example, with math, researchers can estimate how many of a particular plant or animal are alive on the planet. Math also helps researchers figure out a species' minimum viable population, or the point at which it's sure to become extinct, even though there are a few left. All of this mathematical work can help scientists figure out whether a single species is endangered and how to help protect it.

But extinction isn't all about math. In the next two sections, we'll look at the practical aspects of extinction on large and small scales. You'll find out about the world's most devastating mass extinction. You'll also learn why a butterfly, regardless of whether it can create a storm with the flapping of its wings, can cause the extinction of numerous other species if it disappears.